An achievement gap refers to the observed disparity on a number of educational measures between the performance of groups of students, especially groups defined by gender, race/ethnicity, and socioeconomic status. While most of the data presented in this article comes from the United States, similar or different gaps exist for these, and other groups in other nations. For example, students of African origin and Roma children often score lower than other groups in Europe, and some south Asian populations score lower than average in other nations.

It most often describes the issue of low-income/minority education in the United States; that is, that Blacks and Latinos and students from poor families perform worse in school than their well-off White and Asian peers. SAT scores broken down by family income show when students have similar family incomes, Black and Latino students still score lower than Whites, and Whites score lower than Asians with similar incomes.[3]

Eric A. Hanushek and Steven G. Rivkin wrote in their 2006 book that unequal distributions of inexperienced teachers and of racial concentrations in schools can explain all of the increased achievement gap between grades 3 and 8.[4]

The achievement gap can be observed on a variety of measures, including standardized test scores, grade point average, dropout rates, and college-enrollment and -completion rates. Explanations for the phenomenon -- and levels of concern over its existence -- vary widely, and are the source of much controversy, especially since the effort to "close the achievement gap" has become some of the more politically prominent education reform issues.

Exceptions to the achievement gap exist. Schools that are majority black, even poor, can perform well above national norms, with Whitney Young High School and John S. Davidson Fine Arts Magnet School in Augusta, Georgia being prominent examples. Another school with remarkable gains for students of color is Amistad Academy in New Haven,Connecticut. All of the aforementioned schools generally offer more rigorous, traditional modes of instruction, including direct Instruction.

Direction Instruction was found to be the single most effective pedagogical method for raising the skill levels of inner-city students (Project Follow Through). [1] High performing Black schools are not unique to the twentieth century. In Washington, DC in the late 19th century, a predominantly low income Black school performed higher than three White schools in yearly testing. This trend continued until the mid 20th century, and during that time the M Street School exceeded national norms on standardized tests. [2]

Social researchers Carl L. Bankston III and Stephen J. Caldas have argued that the achievement gap, rather than overt racism, is the main source of continuing school segregation in the United States. In their books, A Troubled Dream: The Promise and Failure of School Desegregation in Louisiana [3] (2002) and Forced to Fail: The Paradox of School Desegregation [4] (2005), they maintain that students benefit academically from going to school with relatively high-achieving schoolmates and are academically disadvantaged when they have relatively low-achieving schoolmates. Therefore, a racial gap in achievement means that even parents without racial prejudices tend to avoid sending their children to schools with large percentages of minority students.

Largely refuting the findings of differential performance between groups with different income and education characteristics are the beliefs of the standards based education reform movement adopted by most education agencies in the United States by the 21st century. By studying other nations with a national education policy, setting clear, attainable world class standards of performance, using standards based assessment with the incentive of a high school graduation examination, and other student-centered reforms such as whole language, block scheduling, multiculturalism, desegregation, affirmative action, standards-based mathematics and inquiry-based science, it is believed that all students of all races and incomes will succeed. None of these aforementioned reforms have raised student achievement. The No Child Left Behind federal legislation indeed requires as a final goal that all students of all groups will perform at grade level in all tests, and show continual improvement from year to year, or face sanctions, though some have noted that schools with the highest number of poor and minorities generally face the greatest challenges to meet these goals. Advocates of a rigorous, traditional education point out that the institutions which produce outstanding minority achievement are not based on student-based, constructivist reforms, or curricula focused on racial equity as an explicit goal.

In contrast to norm-referenced tests such as IQ tests and the SAT and ACT which are widely condemned, or in the case of IQ tests made illegal for limiting opportunities for minorities, standards based assessment are lauded for being set based on clearly defined criterion-referenced tests which in theory can be passed by all students, and be constructed free from cultural bias.

However, by 2006, the success of this approach was in question in states such as Washington when fully half of all students promise set in 1993 education reform legislation that most or all students would pass the standards when they were made a mandatory graduation requirement. Still, officials such as Superintendent Terry Bergeson persist in their belief that minority students are just as capable as higher scoring groups and only need additional help. Other states such as Massachusetts MCAS demonstrated high graduation rates for all races, however groups such as Fairtest point out many minority students simply dropped out, while underperforming minorities would still lag whites and Asians.

While states like Washington cited a narrowing of some gaps, there was no evidence that standards based reforms had actually eliminated any gaps, or changed their rank ordering in the United States, Australia, etc. Charles Murray, one of the authors of the Bell Curve questioned whether reductions in point gaps represented any change in relative improvement at all. Though in theory all groups can and will pass such tests at high rates, in practice such tests are even more difficult to answer open-response items which require significant reading and writing and problem solving as well as mathematical skills. While minorities might score between the 25th or 50th percentile on a rank order test, failure rates for minorities remained at 2 to 4 times the rate for the highest scoring groups throughout most testing years on test such as the WASL and only 1 in 4 minority sophomores had passed the standard needed to get their diploma in 2006. 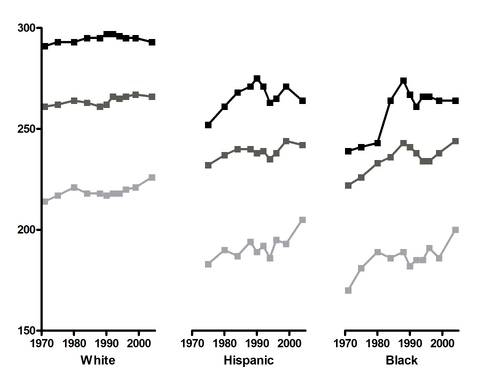 Other gaps remain. Illiteracy was once characteristic of many older African Americans, though now chiefly it is immigrant groups in the United States which have high percentages of persons who cannot read or write English. The high school graduation rate for blacks, compared to when the same rate was achieved for whites, closed by 10 years each decade until the 1980 and 1990 census, when they were essentially equal at a national level. Similarly, the rate of college attendance for African Americans lags that of whites, but is measured at a level similar to whites in the 1970s. It can also be observed that while Asian Americans are the most educated group in the United States, large populations in India and China, especially women, do not receive an education beyond elementary school.