In mammals, the adrenal gland (also known as suprarenal glands) are the triangle-shaped endocrine glands that sit atop the kidneys; their name indicates that position (ad, "near" or "at" + renes, "kidneys"). They are chiefly responsible for regulating the stress response through the synthesis of corticosteroids and catecholamines, including cortisol and adrenaline.

It is separated into two distinct structures, both of which receive regulatory input from the nervous system.

As its name suggests, the adrenal medulla is the central core of the adrenal gland, surrounded by the adrenal cortex. The chromaffin cells of the medulla are the body's main source of the catecholamine hormones adrenaline (epinephrine) and noradrenaline (norepinephrine). These water-soluble hormones, derived from the amino acids phenylalanine and tyrosine, are part of the fight-or-flight response initiated by the sympathetic nervous system. The adrenal medulla can be considered specialized ganglia of the sympathetic nervous system lacking distinct synapses, instead releasing secretions directly into the blood.

By contrast, the adrenal cortex is devoted to synthesis of steroid hormones from cholesterol. Some cells belong to the hypothalamic-pituitary-adrenal axis and are the source of cortisol synthesis. Other cortical cells produce androgens such as testosterone, while some regulate water and electrolyte concentrations by secreting aldosterone. In contrast to the direct innervation of the medulla, the cortex is regulated by neuroendocrine hormones secreted by the pituitary gland and hypothalamus, as well as by the renin-angiotensin system.

Although variations of the blood supply to the adrenal glands (and indeed the kidneys themselves) are common, there are usually three arteries that supply each adrenal gland:

The adrenal glands secrete other hormones as well.

Abdominal portion of the sympathetic trunk, with the celiac and hypogastric plexuses. 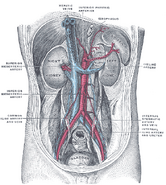 Suprarenal glands viewed from the front.

Suprarenal glands viewed from behind.

Above each human kidney is one of the two adrenal glands.