Aldosterone is a steroid hormone (mineralocorticoid family) produced by the outer-section (zona glomerulosa) of the adrenal cortex in the adrenal gland to regulate sodium and potassium balance in the blood.

The corticosteroids are synthesized from cholesterol within the adrenal cortex. Most steroidogenic reactions are catalysed by enzymes of the cytochrome P450 family. They are located within the mitochondria and require adrenodoxin as a cofactor (except 21-hydroxylase and 17α-hydroxylase).

Note: aldosterone synthase is absent in other sections of the adrenal gland.

Aldosterone is the primary of several endogenous members of the class of mineralocorticoids in human. Deoxycorticosterone is another important member of this class. Aldosterone has two main actions:

Aldosterone is responsible for the reabsorption of about 2% of filtered sodium in the kidneys, which is nearly equal to the entire sodium content in human blood under normal GFR (glomerular filtration rate).[3]

Some of the transcribed genes are crucial for transepithelial sodium transport, including the three subunits of the epithelial sodium channel, the Na+/K+ pumps and their regulatory proteins serum and glucocorticoid-induced kinase, and channel-inducing factor respectively.

The secretion of aldosterone has a diurnal rhythm.[4]

Control of aldosterone release in the kidney 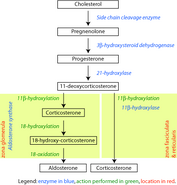