In chemistry, an amino acid is any molecule that contains both amine and carboxylic acid functional groups. In biochemistry, this shorter and more general term is frequently used to refer to alpha amino acids: those amino acids in which the amino and carboxylate functionalities are attached to the same carbon, the so-called α–carbon.

An amino acid residue is what is left of an amino acid once a molecule of water has been lost (an H+ from the nitrogenous side and an OH- from the carboxylic side) in the formation of a peptide bond.

Amino acids are the basic structural building units of proteins. They form short polymer chains called peptides or polypeptides which in turn form structures called proteins. The process of such formation is known as translation, which is part of protein synthesis.

Twenty amino acids are encoded by the standard genetic code and are called proteinogenic or standard amino acids. At least two others are also coded by DNA in a non-standard manner as follows:

Other amino acids contained in proteins are usually formed by post-translational modification, which is modification after translation in protein synthesis. These modifications are often essential for the function of the protein.

Proline is the only proteinogenic amino acid whose side group is cyclic and links to the a-amino group, forming a secondary amino group. Formerly, proline was misleadingly called an imino acid.

Over one hundred amino acids have been found in nature. Some of these have been detected in meteorites, especially in a type known as carbonaceous chondrites. Microorganisms and plants often produce very uncommon amino acids, which can be found in peptidic antibiotics (e.g., nisin or alamethicin). Lanthionine is a sulfide-bridged alanine dimer which is found together with unsaturated amino acids in lantibiotics (antibiotic peptides of microbial origin). 1-Aminocyclopropane-1-carboxylic acid (ACC) is a small disubstituted cyclic amino acid and a key intermediate in the production of the plant hormone ethylene.

In addition to protein synthesis, amino acids have other biologically-important roles. Glycine and glutamate are neurotransmitters as well as standard amino acids in proteins. Many amino acids are used to synthesize other molecules, for example:

Some of the 20 standard amino acids are called essential amino acids because they cannot be synthesized by the body from other compounds through chemical reactions, but instead must be taken in with food. In humans, the essential amino acids are lysine, leucine, isoleucine, methionine, phenylalanine, threonine, tryptophan, valine. Histidine and arginine is generally considered only essential in children, because of their inability to synthesise it given their undeveloped metabolism.

The phrase "branched-chain amino acids" is sometimes used to refer to the aliphatic amino acids: leucine, isoleucine and valine.

The general structure of proteinogenic alpha amino acids is:

Where R represents a side chain specific to each amino acid. Amino acids are usually classified by the properties of the side chain into four groups. The side chain can make them behave like a weak acid, a weak base, a hydrophile, if they are polar, and hydrophobe if they are nonpolar.

Except for glycine, where R = H, amino acids occur in two possible optical isomers, called D and L. Using the newer Cahn Ingold Prelog priority rules for designating the configuration of optical isomers, the L isomer would assigned the letter S and the D isomer would be assigned the letter R. The L (or S) amino acids represent the vast majority of amino acids found in proteins. D (or R) amino acids are found in some proteins produced by exotic sea-dwelling organisms, such as cone snails. They are also abundant components of the cell walls of bacteria.

This information is partially incorrect. L and D isomers are not the same as S and R isomers. S or R isomers may rotate the plane of polarized light to the left or to the right.

Proteins are created by polymerization of amino acids by peptide bonds in a process called translation. This condensation reaction yields the newly formed peptide bond and a molecule of water.

Structures and symbols of the 20 amino acids present in genetic code. 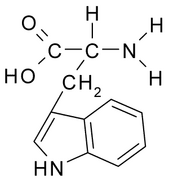 Hydrophilic and hydrophobic interactions of the proteins do not have to rely only on aminoacids themselves. By various posttranslational modifications other chains can be attached to the proteins, forming hydrophobic lipoproteins or hydrophylic glycoproteins.