The anterior talus is wider than the posterior talus. When the foot is dorsiflexed , the wider part of the superior talus moves into the articulating surfaces of the tibia and fibula, creating a more stable joint than when the foot is plantar flexed.

The joint is most stable in dorsiflexion and a sprained ankle is more likely to occur when the foot is plantar flexed. This type of injury more frequently occurs at the anterior talofibular ligament.

The word ankle or ancle is common, in various forms, to Germanic languages, probably connected in origin with the Latin "angulus", or Greek "αγκυλος", meaning bent.

A common variant of the word "ankle" is "cankle", which is commonly used derogatorily to describe the ankles of obese individuals where the ankle and calf may be indistinguishable.

Evaluation of ankle injuries for fracture is done with the Ottawa ankle rules, a set of rules that were developed to minimize unnecessary X-rays.

The bones in the foot

Ligaments of the medial aspect of the foot. 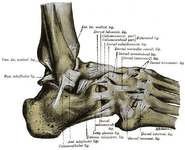 The ligaments of the foot from the lateral aspect. 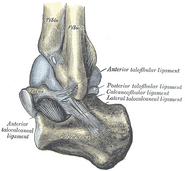 Look up this page on
Wiktionary: Ankle