The ventral horn of the spinal cord is the target for some spasmolytic medications. Norepinephrine release in the ventral horn (as induced by cyclobenzaprine) reduces spasms by innervation (reducing nerve activity) of alpha motor neurons via interaction with gamma fibers.[1]

The anterior column (anterior cornu, anterior horn), directed forward, is broad and of a rounded or quadrangular shape. Its posterior part is termed the base, and its anterior part the head, but these are not differentiated from each other by any well-defined constriction. It is separated from the surface of the medulla spinalis by a layer of white substance which is traversed by the bundles of the anterior nerve roots. In the thoracic region, the postero-lateral part of the anterior column projects laterally as a triangular field, which is named the lateral column (columna lateralis; lateral cornu). 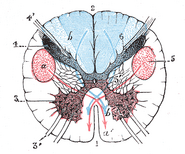