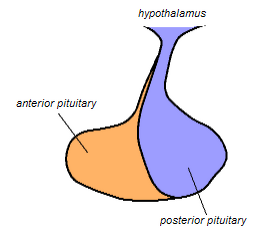 The adenohypophysis is a pea-size gland anterior to the neurohypophysis, caudal to the hypothalamus, and sits in the medial aspect of the brain. Its blood is supplied by the superior and inferior hypophyseal arteries, and it secretes hormones into the hypophyseal vein.

When stained by Periodic acid-Schiff, three main types of secretory cell can be seen: chromophobes (which don't take on any stain), basophils (which stain purple, and are not related to the blood cell), and acidophils (stain orange). About half of the cells are chromophobes, 40% are acidophils, and 10% are basophils.

Basophilic staining cells produce the hormones that specifically act on other endocrine organs, such as TSH, ACTH, FSH and LH. Acidophils produce growth hormone and prolactin. Chromophobes are presumed to be "empty" cells, having already released their granules of hormone.

Five different cell types are recognised by the hormone they produce:

Electron microscopy and immunohistochemistry allow further identification of the hormone produced by the cells.

Hypersecretion mostly results from pituitary adenomas and hyperplasia. Prolactin secreting adenomas and growth hormone or ACTH secreting tumors are common examples. Damage to the hypothalamus or the tract (such as decreased inhibiting factors) can occur.