A number of measure have been developed to assess aspects of adult attatchment.

The AAI and the self-report questionnaires were created with somewhat different aims in mind. Shaver and Fraley note:

"If you are a novice in this research area, what is most important for you to know is that self-report measures of romantic attachment and the AAI were initially developed completely independently and for quite different purposes. One asks about a person's feelings and behaviors in the context of romantic or other close relationships; the other is used to make inferences about the defenses associated with an adult's current state of mind regarding childhood relationships with parents. In principle, these might have been substantially associated, but in fact they seem to be only moderately related--at least as currently assessed. One kind of measure receives its construct validity mostly from studies of romantic relationships, the other from prediction of a person's child's behavior in Ainsworth's Strange Situation. Correlations of the two kinds of measures with other variables are likely to differ, although a few studies have found the AAI to be related to marital relationship quality and a few have found self-report romantic attachment measures to be related to parenting." (Shaver & Fraley, 2004) [1]

The AAI and the self-report questionnaires offer distinct, but equally valid, perspectives on adult attachment. It's therefore worthwhile to become familiar with both approaches.

Developed by Mary Main and her colleagues, this is a semi-structured interview that takes about one hour to administer. It involves about twenty questions and has extensive research validation to support it. A good description can be found in Chapter 19 of Attachment Theory, Research and Clinical Applications, edited by Shaver & Cassidy, Guilford Press, NY, 1999.

There are 11 main measures in common use:

One important advance in the development of attachment questionnaires was the addition of a fourth style of attachment. Bartholomew and Horowitz presented a model that identified four categories or styles of adult attachment. [3] Their model was based on the idea attachment styles reflected people's thoughts about their partners and thought about themselves. Specifically, attachment styles depended on whether or not people judge their partners to be generally accessible and responsive to requests for support, and whether or not people judge themselves to be the kind of individuals towards which others want to respond and lend help. They proposed four categories based on positive or negative thoughts about partners and on positive or negative thoughts about self. 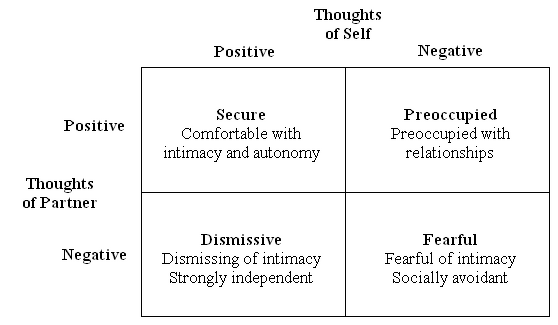 Bartholomew and Horowitz used this model to create the Relationship Questionnaire (RC). The RC consisted of four sets of statements, each describing a category or style of attachment: 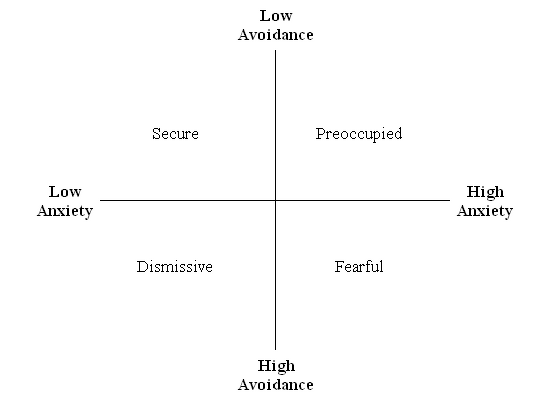