Bayes' theorem (also known as Bayes' rule or Bayes' law) is a result in probability theory, which relates the conditional and marginal probability distributions of random variables. In some interpretations of probability, Bayes' theorem tells how to update or revise beliefs in light of new evidence a posteriori.

Bayes' theorem relates the conditional and marginal probabilities of stochastic events A and B:

Each term in Bayes' theorem has a conventional name:

With this terminology, the theorem may be paraphrased as

In addition, the ratio P(B|A)/P(B) is sometimes called the standardized likelihood or normalized likelihood, so the theorem may also be paraphrased as

To derive the theorem, we start from the definition of conditional probability. The probability of event A given event B is

Likewise, the probability of event B given event A is

Rearranging and combining these two equations, we find

This lemma is sometimes called the product rule for probabilities. Dividing both sides by P(B), providing that it is non-zero, we obtain Bayes' theorem:

Bayes' theorem is often embellished by noting that

where AC is the complementary event of A (often called "not A"). So the theorem can be restated as

More generally, where {Ai} forms a partition of the event space,

for any Ai in the partition.

Bayes' theorem in terms of odds and likelihood ratio

are the odds of A given B,

are the odds of A by itself,

is the likelihood ratio.

and there is an analogous statement of the law of total probability:

Here we have indulged in a conventional abuse of notation, using f for each one of these terms, although each one is really a different function; the functions are distinguished by the names of their arguments.

on the probability space

, the abstract Bayes theorem for a

This formulation is used in Kalman filtering to find Zakai equations. It is also used in financial mathematics for change of numeraire techniques.

Theorems analogous to Bayes' theorem hold in problems with more than two variables. For example:

This can be derived in several steps from Bayes' theorem and the definition of conditional probability:

A general strategy is to work with a decomposition of the joint probability, and to marginalize (integrate) over the variables that are not of interest. Depending on the form of the decomposition, it may be possible to prove that some integrals must be 1, and thus they fall out of the decomposition; exploiting this property can reduce the computations very substantially. A Bayesian network, for example, specifies a factorization of a joint distribution of several variables in which the conditional probability of any one variable given the remaining ones takes a particularly simple form (see Markov blanket).

Suppose there are two bowls full of cookies. Bowl #1 has 10 chocolate chip cookies and 30 plain cookies, while bowl #2 has 20 of each. Fred picks a bowl at random, and then picks a cookie at random. We may assume there is no reason to believe Fred treats one bowl differently from another, likewise for the cookies. The cookie turns out to be a plain one. How probable is it that Fred picked it out of bowl #1?

Given all this information, we can compute the probability of Fred having selected bowl #1 given that he got a plain cookie, as such:

As we expected, it is more than half.

Tables of occurrences and relative frequencies

It is often helpful when calculating conditional probabilities to create a simple table containing the number of occurrences of each outcome, or the relative frequencies of each outcome, for each of the independent variables. The tables below illustrate the use of this method for the cookies.

Bayes' theorem is useful in evaluating the result of drug tests. Suppose a certain drug test is 99% sensitive and 99% specific, that is, the test will correctly identify a drug user as testing positive 99% of the time, and will correctly identify a non-user as testing negative 99% of the time. This would seem to be a relatively accurate test, but Bayes' theorem will reveal a potential flaw. Let's assume a corporation decides to test its employees for opium use, and 0.5% of the employees use the drug. We want to know the probability that, given a positive drug test, an employee is actually a drug user. Let "D" be the event of being a drug user and "N" indicate being a non-user. Let "+" be the event of a positive drug test. We need to know the following:

Given this information, we can compute the probability that an employee who tested positive is actually a drug user:

Despite the high accuracy of the test, the probability that the employee is actually a drug user is only about 33%. The rarer the condition for which we are testing, the greater the percentage of positive tests that will be false positives. This illustrates why it is important to do follow-up tests.

Applications of Bayes' theorem often assume the philosophy underlying Bayesian probability that uncertainty and degrees of belief can be measured as probabilities. One such example follows. For additional worked out examples, including simpler examples, please see the article on the examples of Bayesian inference.

The prior probability density function f(r) summarizes what we know about the distribution of r in the absence of any observation. We provisionally assume in this case that the prior distribution of r is uniform over the interval [0, 1]. That is, f(r) = 1. If some additional background information is found, we should modify the prior accordingly. However before we have any observations, all outcomes are equally likely.

Under the assumption of random sampling, choosing voters is just like choosing balls from an urn. The likelihood function L(r) = P(m = 7|r, n = 10,) for such a problem is just the probability of 7 successes in 10 trials for a binomial distribution.

and the posterior distribution for r is then

We are presented with three doors - red, green, and blue - one of which has a prize. We choose the red door, which is not opened until the presenter performs an action. The presenter who knows what door the prize is behind, and who must open a door, but is not permitted to open the door we have picked or the door with the prize, opens the green door and reveals that there is no prize behind it and subsequently asks if we wish to change our mind about our initial selection of red. What is the probability that the prize is behind the blue and red doors?

Let us call the situation that the prize is behind a given door Ar, Ag, and Ab.

, and to make things simpler we shall assume that we have already picked the red door.

Let us call B "the presenter opens the green door". Without any prior knowledge, we would assign this a probability of 50% 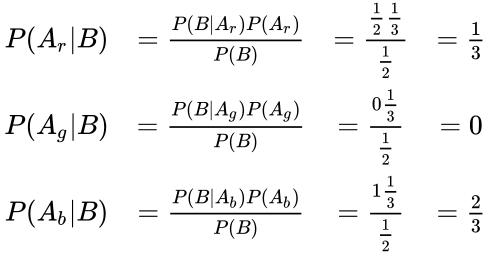 Note how this depends on the value of P(B).

An investigation by a statistics professor (Stigler 1983) suggests that Bayes' theorem was discovered by Nicholas Saunderson some time before Bayes.

Bayes' theorem is named after the Reverend Thomas Bayes (1702–1761), who studied how to compute a distribution for the parameter of a binomial distribution (to use modern terminology). His friend, Richard Price, edited and presented the work in 1763, after Bayes' death, as An Essay towards solving a Problem in the Doctrine of Chances. Pierre-Simon Laplace replicated and extended these results in an essay of 1774, apparently unaware of Bayes' work.

One of Bayes' results (Proposition 5) gives a simple description of conditional probability, and shows that it can be expressed independently of the order in which things occur:

Note that the expression says nothing about the order in which the events occurred; it measures correlation, not causation. His preliminary results, in particular Propositions 3, 4, and 5, imply the result now called Bayes' Theorem (as described above), but it does not appear that Bayes himself emphasized or focused on that result.

Bayes' main result (Proposition 9 in the essay) is the following: assuming a uniform distribution for the prior distribution of the binomial parameter p, the probability that p is between two values a and b is

Versions of the essay