The brachial plexus is an arrangement of nerve fibres (a plexus) running from the spine (vertebrae C5-T1), through the neck, the axilla (armpit region), and into the arm.

The brachial plexus is responsible for cutaneous and muscular innervation of the entire upper limb, with two exceptions: the trapezius muscle innervated by the spinal accessory nerve and an area of skin near the axilla innervated by the intercostobrachialis nerve.

Therefore, lesions of the plexus can lead to severe functional impairment.

Brachial plexus lesions are classified as traumautic or obstetric. These typically result from excessive stretching and avulsion injury. Traumatic injuries are often caused by high-velocity motor vehicle accidents, especially in motorcyclists. Injury from a direct blow to the lateral side of the scapula is also possible.

Most commonly, forceps delivery or falling on the neck at an angle causes upper plexus lesions (Erb's Palsy). This type of injury produces a very characteristic sign called Waiter's tip deformity due to loss of the lateral rotators of the shoulder, arm flexors, and hand extensor muscles.

Much less frequently, sudden upward pulling on an abducted arm (as when someone breaks a fall by grasping a tree branch) produces a lower plexus injury. This results in the sign known as clawed hand due to loss of function of the ulnar nerve and the intrinsic muscles of the hand it supplies.

The cardinal signs of brachial plexus avulsion are:

The diagnosis may be confirmed by an EMG examination in 5-7 days. The evidence of denervation will be evident. If there is no nerve conduction 72 hours after the injury, then avulsion is most likely. 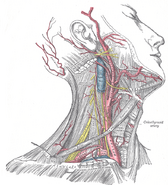 Superficial dissection of the right side of the neck, showing the carotid and subclavian arteries. 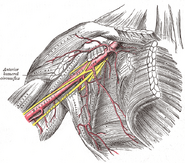 The axillary artery and its branches.

Diagram of segmental distribution of the cutaneous nerves of the right upper extremity. Posterior view. 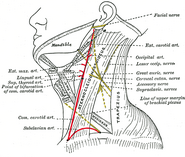 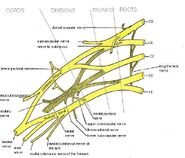 Brachial Plexus Palsy, also referred to as Erb's Palsy, is a condition that affects the nerves that control the muscles in the arm and hand.Possible Symptoms:-a limp or paralyzed arm-lack of muscle control in the arm-a decrease of sensation in the arm or handTypes of Brachial Plexus InjuriesThe injury may involve one or more nerves of the brachial plexus. The Brachial Plexus is located on the right and left side of your neck, between the neck and shoulder area.It is a group of nerves that run from the spinal cord through the arm to the wrist and hand.

Q. What is a Brachial Plexus Injury?

A. A brachial plexus injury is an injury to the nerves that supply the muscles of the arm. Injury to nerves of the brachial plexus can result in complete to partial paralysis to the shoulder, upper arm, elbow, forearm, wrist, hand, or fingers.

Q. Are there various degrees of severity with a Brachial Plexus Injury?

A. Brachial plexus injuries occur when there is excessive stretching, tearing, or other trauma to the brachial plexus network. Injuries can be sustained during delivery of a baby. This is known as Obstetrical Brachial Plexus. Traumatic Brachial Plexus is seen when injuries are sustained secondary to vehicular accidents such as automobiles, motorcycles, or boats, sports injuries particularly football, gunshot wounds, or surgeries. Traumatic BPI's have also been noted with animal bites or puncture wounds.

Q. What are some symptoms associated with Brachial Plexus Injuries?

A. There are several degrees of symptoms that can be seen with BPI. Here are some of the most typical examples: � Limited active range of motion of the entire arm or any part of the arm. � Sensation changes in the involved arm. � Weakness of specific muscle groups. � Poor ability to perform typical midline activities. � Poor ability to weight bear through the arm. � Neglect of the affected arm. � Posturing of the arm in atypical positions. � Developmental Delay � Torticollis- a shortened muscle of the neck, so the head tilts to one side.

A. The current research suggests that brachial plexus injuries are seen 1-3 in every 1000 live births.

Q. What are the treatments?

A. Treatments include but are not limited to the following: Physical therapy, occupational therapy, aquatic therapy, surgical interventions, splinting, casting, electrical stimulation.

Q. When should I initiate treatments?

A. It is essential that a person suffering from a brachial plexus injury initiate treatments as soon as possible. Typically, a person suffering from an obstetrical brachial plexus injury sees a physical therapist or occupational therapist in the first two weeks of life. The goal of the therapist is to assist the family in Range of motion exercises, assess for muscle contractions even when movement is not seen, address positioning, make adaptive equipment, reduce the infant's tendencies toward neglect, and avoid atypical movement patterns, avoid tightening of muscles, and assist with weight bearing activities even in the newborn stage.