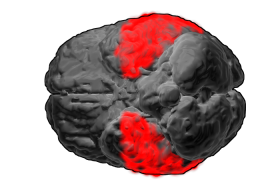 Brodmann area 20, or BA20, is part of the temporal cortex in the human brain. The region encompasses most of the ventral temporal cortex, a region believed to play a part in high-level visual processing and recognition memory.

Brodmann area 20 is a subdivision of the cerebral cortex of the guenon defined on the basis of cytoarchitecture. It is cytoarchitecturally homologous to the inferior temporal area 20 of the human (Brodmann-1909). Distinctive features (Brodmann-1905): area 20 is similar to area 19 of Brodmann-1909 in the relative abundance of small cell types relative to the number of larger pyramidal cells; a very dense, wide internal granular layer (IV) composed almost exclusively of granule cells, as in area 18 of Brodmann-1909; a broad, clear internal pyramidal layer (V) with few cells; and a distinct multiform layer (VI). The major differences from areas 18 and 19 are somewhat lesser cell density; absence of a division of the external pyramidal layer (III) into sublayers 3a and 3b; layer V is more clearly distinguished from layer VI and, on average, has a greater density of pyramidal ganglion cells than in the other areas; layer VI is wider, more diffuse and has fewer cells that are concentrated in the outer part of the layer to produce a denser sublayer 6a and a less dense sublayer 6b.