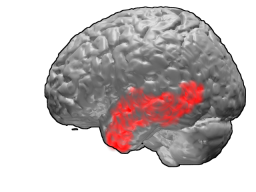 Brodmann area 21, or BA21, is part of the temporal cortex in the human brain. The region encompasses most of the lateral temporal cortex, a region believed to play a part in auditory processing and language. Language function is left lateralized in most individuals. BA21 is superior to BA20 and inferior to BA40 and BA41.

Brodmann area 21 is a subdivision of the cerebral cortex of the guenon defined on the basis of cytoarchitecture. It is cytoarchitecturally homologous to the middle temporal area 21 of the human (Brodmann-1909). Distinctive features (Brodmann-1905): Compared to area 20 of Brodmann-1909, the total cortical thickness of area 21 is greater, the granular cells are less abundant, and the boundary with the subcortical white matter is less distinct; the molecular layer (I) is wider; the pyramidal cells of sublayer 3b of the external pyramidal layer (III) are larger; the internal granular layer (IV) is less developed and contains fewer cells; ganglion cells of the internal pyramidal layer (V) are larger, rounder, and densely arrayed adjacent to layer IV; the boundary between layer V and the multiform layer (VI) is indistinct; and layer VI is wider and has no sublayers.