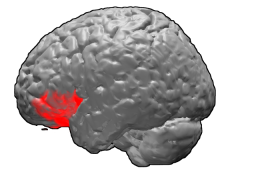 This area is also known as orbital area 47. In the human, on the orbital surface it surrounds the caudal portion of the orbital sulcus (H) from which it extends laterally into the orbital part of inferior frontal gyrus (H). Cytoarchitectonically it is bounded caudally by the triangular area 45, medially by the prefrontal area 11 of Brodmann-1909, and rostrally by the frontopolar area 10 (Brodmann-1909).

It incorporates the region that Brodmann identified as "Area 12" in the monkey, and therefore, following the suggestion of Michael Petrides, some contemporary neuroscientists refer to the region as "BA47/12."

BA47 has been implicated in the processing of syntax in spoken and signed languages, and more recently in musical syntax.