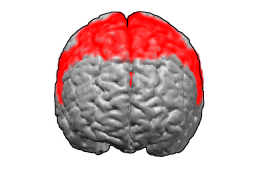 Brodmann area 6 is also called agranular frontal area 6 in humans because it lacks in internal granular cortical layer (layer IV). It is a subdivision of the cytoarchitecturally defined precentral region of cerebral cortex. In the human brain it is located on the portions of the precentral gyrus which are not occupied by the gigantopyramidal area 4; furthermore, BA6 extends onto the caudal portions of the superior frontal and middle frontal gyri. It extends from the cingulate sulcus on the medial aspect of the hemisphere to the lateral sulcus on the lateral aspect. Cytoarchitecturally it is bounded rostrally by the granular frontal region and caudally by the gigantopyramidal area 4 (Brodmann, 1909).

Brodmann area 6 is a cytoarchitecturally defined portion of the frontal lobe of the guenon. Brodmann-1909 regarded it as topographically and cytoarchitecturally homologous to the human agranular frontal area 6 and noted that in the monkey area 4 is larger than area 6, while in the human area 6 is larger than area 4. Distinctive features (Brodmann-1905): it is thick relative to other cortical areas; the transition from cortex to subcortical white matter is gradual; cell layers are indistinct; and the internal granular layer (IV) is absent.