Published in 2002 by the CIE Technical Committee 8-01 (Color Appearance Modelling for Color Management Systems), as of 2008 CIECAM02 is the most recent color appearance model ratified by the CIE, and the successor of CIECAM97s.[1]

The two major parts of the model are its chromatic adaptation transform, CIECAT02, and its equations for calculating mathematical correlates for the six technically-defined dimensions of color appearance: brightness (luminance), lightness, colorfulness, chroma, saturation, and hue.

CIECAM02 takes for its input the tristimulus values of the stimulus, the tristimulus values of an adapting white point, adapting background, and surround luminance information, and whether or not observers are discounting the illuminant (color constancy is in effect). The model can be used to predict these appearance attributes or, with forward and reverse implementations for distinct viewing conditions, to compute corresponding colors.

When referring to the literature, it is also useful to be aware of the difference between the terms adopted white point (the computational white point) and the adapted white point (the observer white point).[4] The distinction may be important in mixed mode illumination, where psychophysical phenomena come into play. This is a subject of research.

CIECAM02 defines three surround(ing)s – average, dim, and dark – with associated parameters defined here for reference in the rest of this article:[5]

For intermediate conditions, these values can be linearly interpolated.[5]

The absolute luminance of the adapting field, which is a quantity that will be needed later, should be measured with a photometer. If one is not available, it can be calculated using a reference white:

Note: Care should be taken not to confuse LW, the absolute luminance of the reference white in cd/m2, and Lw the red cone response in the LMS color space.

Given a set of tristimulus values in XYZ, the corresponding LMS values can be determined by the MCAT02 transformation matrix (calculated using the CIE 1931 2° standard colorimetric observer).[1] The sample color in the test illuminant is:

Once in LMS, the white point can be adapted to the desired degree by choosing the parameter D.[3] For the general CAT02, the corresponding color in the reference illuminant is: 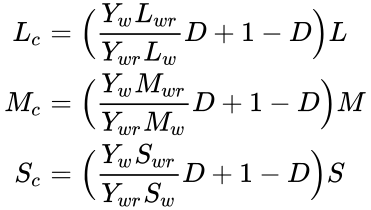 where the Yw / Ywr factor accounts for the two illuminants having the same chromaticity but different reference whites.[6] The subscripts indicate the cone response for white under the test (w) and reference illuminant (wr). The degree of adaptation (discounting) D can be set to zero for no adaptation (stimulus is considered self-luminous) and unity for complete adaptation (color constancy). In practice, it ranges from 0.65 to 1.0, as can be seen from the diagram. Intermediate values can be calculated by:[5]

where surround F is as defined above and LA is the adapting field luminance in cd/m2.[1]

In CIECAM02, the reference illuminant has equal energy Lwr = Mwr = Swr = 100) and the reference white is the perfect reflecting diffuser (i.e., unity reflectance, and Ywr = 100) hence: 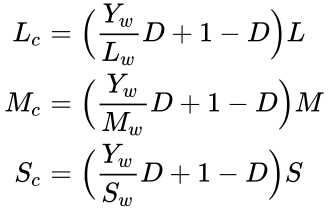 Furthermore, if the reference white in both illuminants have the Y tristimulus value (Ywr = Yw) then: 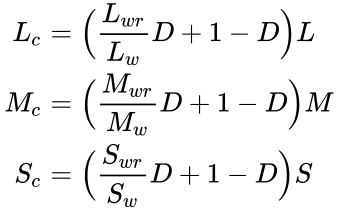 After adaptation, the cone responses are converted to the Hunt–Pointer–Estévez space by going to XYZ and back:[5]

Finally, the response is compressed based on the generalized Michaelis–Menten equation (as depicted aside):[5] 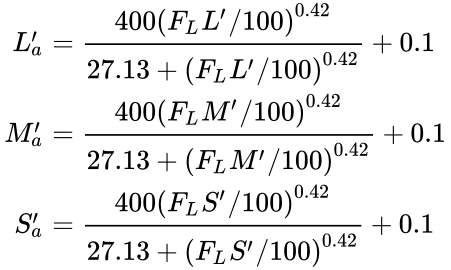 The 4.5 factor accounts for the fact that there are fewer cones at shorter wavelengths (the eye is less sensitive to blue). The order of the terms is such that b is positive for yellowish colors (rather than blueish).

(This is not exactly the same as the eccentricity factor given in the table.)

Calculate the achromatic response A:

The correlate of lightness is

where c is the impact of surround (see above), and

The correlate of brightness is

Then calculate a temporary quantity t,

The correlate of chroma is

The correlate of colorfulness is

The correlate of saturation is