The celiac plexus (also known as the solar plexus) is a complex network of nerves (a plexus) located in the abdomen.

The celiac plexus is located near where the celiac trunk, superior mesenteric artery, and renal arteries branch from the abdominal aorta. It is behind the stomach and the omental bursa and in front of the crura of the diaphragm, on the level of the first lumbar vertebra, L1.

The plexus is formed (in part) by the greater and lesser splanchnic nerves of both sides, and also parts of the right vagus nerve.

The celiac plexus includes a number of smaller plexi:

Other plexi that are derived from the celiac plexus:

The celiac plexus is often popularly referred to as the solar plexus, generally in the context of a blow to the stomach. In many of these cases, it is not the celiac plexus itself being referred to, but rather the region where it is located. A blow to the stomach can upset this region. This can cause the diaphragm to spasm, resulting in difficulty in breathing — a sensation commonly known as "getting the wind knocked out of you". A blow to this region can also affect the celiac plexus itself, possibly interfering with the functioning of the viscera, as well as causing great pain.

Celiac plexus block by means of fluoroscopically guided injection is sometimes used to treat intractable pain from cancers such as pancreatic cancer.

The solar plexus in psychology

According to Hindu beliefs, the solar plexus chakra is "the center of etheric-psychic intuition: a vague or non-specific, sensual sense of knowing; a vague sense of size, shape, and intent of being"[1]. As such, some psychics recommend "listening" to it since it may help out in making better decisions in one's life on many different levels[2]. 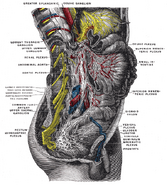 Lower half of right sympathetic cord.