Important fibers running through the cerebral peduncles include the corticospinal tract and the corticobulbar tract, among others. This area contains many nerve tracts conveying motor information to and from the brain to the rest of the body. 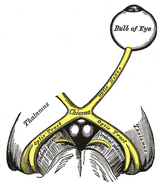 The left optic nerve and the optic tracts.