The cervix (or neck of the uterus) is the lower, narrow portion of the uterus where it joins with the top end of the vagina. It is cylindrical or conical in shape and protrudes through the upper anterior vaginal wall. Approximately half its length is visible with appropriate medical equipment; the remainder lies above the vagina beyond view. It is occasionally called "cervix uteri". Cervix means neck in Latin.

The portion projecting into the vagina is referred to as the portio vaginalis or ectocervix. On average, the ectocervix is 3 cm long and 2.5 cm wide. It has a convex, elliptical surface and is divided into anterior and posterior lips.

The passageway between the external os and the uterine cavity is referred to as the endocervical canal. It varies widely in length and width, along with the cervix overall. Flattened anterior to posterior, the endocervical canal measures 7 to 8 mm at its widest in reproductive-aged women.

The endocervical canal terminates at the internal os which is the opening of the cervix inside the uterine cavity.

There are pockets in the lining of the cervix known as cervical crypts. They function to produce cervical fluid.[1]

Times in life when this metaplasia of the transformation zone occurs:

All these changes are normal and the occurrence is said to be physiological.

However all this metaplasia does increase the risk of cancer in this area - the transformation zone is the most common area for cervical cancer to occur.

At certain times of life, the columnar epithelium is replaced by metaplastic squamous epithelium, and is then known as the transformation zone.

Nabothian cysts are often found in the cervix.[3]

After a menstrual period ends, the external os is blocked by mucus that is thick and acidic. This "infertile" mucus blocks spermatozoa from entering the uterus.[4] For several days around the time of ovulation, "fertile" types of mucus are produced: they have a higher water content, are less acidic, and have a ferning pattern that helps guide spermatozoa through the cervix.[5] This ferning is a branching pattern seen in the mucus when observed with low magnification.

Some methods of fertility awareness involve estimating a woman's periods of fertility and infertility by observing changes in her body. Among these changes are several involving the quality of her cervical mucus: the sensation it causes at the vulva, its elasticity (spinnbarkeit), its transparency, and the presence of ferning.[5]

Most methods of hormonal contraception work primarily by preventing ovulation, but their effectiveness is increased because they prevent the fertile types of cervical mucus from being produced. Conversely, methods of thinning the mucus may help to achieve pregnancy. One suggested method is to take guaifenesin in the few days before ovulation.[6]

During pregnancy the cervix is blocked by a special antibacterial mucosal plug which prevents infection, somewhat similar to its state during the infertile portion of the menstrual cycle. The mucus plug comes out as the cervix dilates in labor or shortly before.

After menstruation and directly under the influence of estrogen, the cervix undergoes a series of changes in position and texture. During most of the menstrual cycle, the cervix remains firm, like the tip of the nose, and is positioned low and closed. However, as a woman approaches ovulation, the cervix becomes softer, and rises and opens in response to the high levels of estrogen present at ovulation.[1] These changes, accompanied by the production of fertile types of cervical mucus, support the survival and movement of sperm.

During menstruation the cervix stretches open slightly to allow the endometrium to be shed. This stretching is believed to be part of the cramping pain that many women experience. Evidence for this is given by the fact that some women's cramps subside or disappear after their first vaginal birth because the cervical opening has widened. During childbirth, contractions of the uterus will dilate the cervix up to 10 cm in diameter to allow the child to pass through.

Stimulation of the cervix leads to orgasm for some women. During orgasm, the cervix convulses and the external os dilates. Dr. R. Robin Baker and Dr. Mark A. Bellis, both at the University of Manchester, first proposed that this behavior would tend to draw semen in the vagina into the uterus, increasing the likelihood of conception. This explanation has been called the "upsuck theory of female orgasm." Komisaruk, Whipple, and Beyer-Flores, in their book, The Science of Orgasm, claimed there is evidence in support of the upsuck theory. Science historian Elisabeth A. Lloyd (The Case of the Female Orgasm) and others have questioned the logic of this theory and the quality of the experimental data used to back it.

Short cervix[7] is the strongest predictor of preterm birth.[8][9][10] Some treatments to prevent cervical cancer, such as LEEP may shorten the cervix.

Human papillomavirus (HPV) infection is a necessary factor in the development of nearly all cases of cervical cancer. HPV vaccines can reduce the chance of developing cervical cancer, if administered before initiation of sexual activity. Potentially pre-cancerous changes in the cervix can be detected by a Pap smear, in which epithelial cells are scraped from the surface of the cervix and examined under a microscope. With appropriate treatment of detected abnormalities, cervical cancer can be prevented. Most cervical cancers occur in women who have never had a Pap smear, or not had one within the last five years. 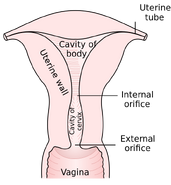 Posterior half of uterus and upper part of vagina.