In Hinduism and in some related Asian cultures, a chakra (Devanagari: चक्र) is thought to be a nexus of metaphysical and/or biophysical energy residing in the human body.

The word comes from the Sanskrit cakra चक्र meaning "wheel" or "circle" (also cognate to both words), and sometimes also referring to the "wheel of life". The pronunciation of this word can be approximated in English by chuhkruh, with ch as in chart and both instances of a as in yoga (the commonly found pronunciation shockrah is incorrect). Some traditional sources describe five or seven chakras, others eight. 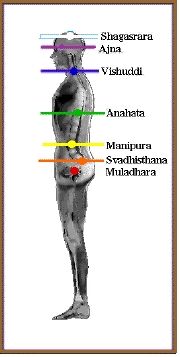 The chakras are described as being aligned in an ascending column from the base of the spine to the top of the head. In new age practices, each chakra is associated with a certain color. In various traditions chakras are associated with multiple physiological functions, an aspect of consciousness, a classical element, and other distinguishing characteristics. They are visualised as lotuses with a different number of petals in every chakra.

The chakras are thought to vitalise the physical body and to be associated with interactions of a physical, emotional and mental nature. They are considered loci of life energy, or prana, (also called shakti, or chi), which is thought to flow among them along pathways called nadis. The function of the chakras is to spin and draw in this Universal Life Force Energy to keep the spiritual, mental, emotional and physical health of the body in balance.

Traditional Chinese medicine also relies on a similar model of the human body as an energy system.

The chakras are described in the tantric texts the Sat-Cakra-Nirupana, and the Padaka-Pancaka, in which they are described as emanations of consciousness from Brahman, an energy emanating from the spiritual which gradually turns concrete, creating these distinct levels of chakras, and which eventually finds its rest in the Muladhara chakra. They are therefore part of an emanationist theory, like that of the kabbalah in the west, lataif-e-sitta in Sufism or neo-platonism. The energy that was unleashed in creation, called the Kundalini, lies coiled and sleeping at the base of the spine. It is the purpose of the tantric or kundalini forms of yoga to arouse this energy, and cause it to rise back up through the increasingly subtler chakras, until union with God is achieved in the Sahasrara chakra at the crown of the head.

The seven chakras are said by some to reflect how the unified consciousness of humanity (the immortal human being or the soul), is divided to manage different aspects of earthly life (body/instinct/vital energy/deeper emotions/communication/having an overview of life/contact to God). The chakras are placed at differing levels of spiritual subtlety, with Sahasrara at the top being concerned with pure consciousness, and Muladhara at the bottom being concerned with matter, which is seen simply as crudified consciousness.

The earliest known mention of chakras is found in the later Upanishads, including specifically the Brahma Upanishad and the Yogatattva Upanishad. These Vedic models were adapted in Tibetan Buddhism as Vajrayana theory, and in the Tantric Shakta theory of chakras.[citation needed]

It is the shakta theory of 7 main chakras that most people in the West adhere to, either knowingly or unknowingly, largely thanks to a translation of two Indian texts, the Sat-Cakra-Nirupana, and the Padaka-Pancaka, by Sir John Woodroffe, alias Arthur Avalon, in a book entitled The Serpent Power.

This book is extremely detailed and complex, and later the ideas were developed into what is predominant western view of the Chakras by the Theosophists, and largely the controversial (in theosophical circles) C. W. Leadbeater in his book The Chakras, which are in large part his own meditations and insights on the matter.

That said, many present-day Indian gurus that incorporate chakras within their systems of philosophy do not seem to radically disagree with the western view of chakras, at least on the key points, and both these eastern and western views have developed from the Shakta Tantra school.

There are various other models of chakras in other traditions, notably in Chinese medicine, and also in Tibetan Buddhism. Even in Jewish kabbalah, the different Sephiroth are sometimes associated with parts of the body. In Islamic Sufism, Lataif-e-Sitta ( Six Subtleties ) are considered as psychospiritual "organs" or faculties of sensory and suprasensory perception, activation of which makes a man complete. Attempts are made to try and reconcile the systems with each other, and notably there are some successes, even between such diverged traditions as Shakta Tantra, Sufism and Kabbalism, where chakras, lataif and Sephiroth can seemingly represent the same archetypal spiritual concepts. In Surat Shabda Yoga, initiation by an Outer Living Satguru (Sat - true, Guru - teacher) is required and involves reconnecting soul to the Shabda and stationing the Inner Shabda Master (the Radiant Form of the Master) at the third eye chakra.[citation needed]

Sahasrara or the crown chakra is said to be the chakra of consciousness, the master chakra that controls all the others. Its role would be very similar to that of the pituitary gland, which secretes hormones to control the rest of the endocrine system, and also connects to the central nervous system via the hypothalamus. The thalamus is thought to have a key role in the physical basis of consciousness. Symbolised by a lotus with a thousand petals.

Ajna or the third eye is linked to the pineal gland. Ajna is the chakra of time and awareness and of light. The pineal gland is a light sensitive gland, that produces the hormone melatonin, which regulates the instincts of going to sleep and awakening. It has been conjectured that it also produces trace amounts of the psychedelic chemical dimethyltryptamine. Symbolised by a lotus with two petals.

(Note: some argue that the pineal and pituitary glands should be exchanged in their relationship to the Crown and Brow chakras, based on the description in Arthur Avalon's book on kundalini called Serpent Power or empirical research.)

Vishuddha or the throat chakra is said to be related to communication and growth, growth being a form of expression. This chakra is paralleled to the thyroid, a gland that is also in the throat, and which produces thyroid hormone, responsible for growth and maturation. Symbolised by a lotus with sixteen petals.

Anahata or the heart/emotions chakra is related to love, equilibrium, and well-being. It is related to the thymus, located in the chest. This organ is part of the immune system, as well as being part of the endocrine system. It produces T cells responsible for fighting off disease, and is adversely affected by stress. Symbolised by a lotus with twelve petals.

Manipura or the solar plexus chakra is related to energy, assimilation and digestion, and is said to correspond to the roles played by the pancreas and the outer adrenal glands, the adrenal cortex. These play a valuable role in digestion, the conversion of food matter into energy for the body. Symbolised by a lotus with ten petals.

Swadhisthana or the sacral chakra is located in the groin, and is related to emotion, sexuality and creativity. This chakra is said to correspond to the testicles or the ovaries, that produce the various sex hormones involved in the reproductive cycle, which can cause dramatic mood swings. Symbolised by a lotus with six petals.

Muladhara or the base or root chakra is related to security, survival and also to basic human potentiality. This centre is located in the region between the genitals and the anus. Although no endocrine organ is placed here, it is said to relate to the inner adrenal glands, the adrenal medulla, responsible for the fight and flight response when survival is under threat. In this region is located a muscle that controls ejaculation in the sexual act. A parallel is drawn between the sperm cell and the ovum, where the genetic code lies coiled, and the kundalini. Symbolised by a lotus with four petals.

The following table sets forth some of the properties associated with each chakra:

It is claimed to be very important to know the right color tone for a specific area because the wrong hue of color can allegedly do different things to the energetic system. Yet different systems differ in the colors they ascribe.

The colors above simply represent, in order, the colors of the rainbow. In other words, all monochromatic colors.

For a discussion on chakra petals see Petal (chakra).

Additionally, some teachers describe a Transpersonal chakra above the crown chakra. There are also said to be many minor chakras, for example between the major chakras.

Chakras and the endocrine system

Parallels have often been drawn, by supporters of the existence of chakras, between the positions and functions of the chakras, and of the various organs of the endocrine system.[citation needed]

Chakrology is a neologism sometimes employed by Alternative Medicine practitioners or esoteric philosophers for the study of chakras. There are many different chakrologies, some of them based on ancient Indian Hindu Tantric esoteric traditions, New Age interpretations, or Western occult analyses, as well as ancient Greek and Christian references.

This compares notably with Tibetan Buddhism, in which the sequence of centres is very similar, beginning with the eyebrows and going down to the heart, which symbolizes the highest consciousness. Varying Tibetan systems, however, use different numbers of centres, typically between 3 and 7, as appropriate for the practice in question.[citation needed]

It is alleged by modern mystics that in Hesychasm, the centres of prayer were points of concentration or meditation on the body to be used during the hesychastic prayer. This terminology, however, is not used in Orthodox Christianity and is not and has not been part of hesychastic prayer as practiced within the Orthodox Churches.[citation needed]

The idea of chakras as understood in Eastern philosophy does not exist in medical science. In Eastern thought, the chakras are thought to be levels of consciousness, and states of the soul, and 'proving' the existence of chakras is asking to 'prove' the existence of a soul. A mystic deals with these occult concepts on the occult plane, as a model for their own internal experience, and when talking about 'energy centres', they are generally talking about subtle, spiritual forces, which work on the psyche and spirit, not about physical, electrical, or magnetic fields.

The primary importance and level of existence of chakras is therefore posited to be in the psyche. However, there are those who believe that chakras have a physical manifestation as well. Although there is no evidence that Indian mystics made this association themselves, it is noted by many that there is a marked similarity between the positions and roles described for chakras, and the positions and roles of the glands in the endocrine system, and also by the positions of the nerve ganglia (also known as "plexuses") along the spinal column, opening the possibility that two vastly different systems of conceptualization have been brought to bear to systemize insights about the same phenomenon. By some, chakras are thought of as having their physical manifestation in the body as these glands, and their subjective manifestation as the associated psychological and spiritual experiences.

Indeed, the various hormones secreted by these glands do have a dramatic effect on human psychology, and an imbalance in one can cause a psychological or physical imbalance in a person. Whether these changes in body state have a bearing on spiritual matters is a subject of dissent even among the Indian theorists, and the different systems of conceptualization, Indian and Western, make only a partial convergence in this case.

Perhaps the most psychologically dramatic and potent secretion of these glands is the psychedelic drug DMT (which is thought to be synthesized by the pineal gland, corresponding to the brow chakra). At least in the West, some individuals have sought spiritual breakthroughs through the use of such chemical aids, occasionally referred to as entheogens in this context. (See for example: Aldous Huxley, The Doors of Perception, a classic of new-age spirituality.)