The ciliary muscle /ˈsɪli.ɛəri/ is a ring of striated smooth muscle[2] in the eye's middle layer (vascular layer) that controls accommodation for viewing objects at varying distances and regulates the flow of aqueous humour into Schlemm's canal. It changes the shape of the lens within the eye, not the size of the pupil which is carried out by the sphincter pupillae muscle.

The word ciliary had its origins around 1685–1695.[3] The term cilia originated a few years later in 1705–1715, and is the Neo-Latin plural of cilium meaning eyelash. In Latin, cilia means upper eyelid and is perhaps a back formation from supercilium, meaning eyebrow. The suffix -ary originally occurred in loanwords from Middle English (-arie), Old French (-er, -eer, -ier, -aire, -er), and Latin (-ārius); it can generally mean "pertaining to, connected with," "contributing to" and "for the purpose of."[4] Taken together, cili(a)-ary pertains to various anatomical structures in and around the eye, namely the ciliary body and annular suspension of the lens of the eye.[5]

The ciliary muscle develops from the mesoderm within the choroid[6] and is considered a cranial neural crest derivative.

Main article: accommodation of the eye

According to Hermann von Helmholtz's theory, the circular ciliary muscle fibers affect zonular fibers in the eye (fibers that suspend the lens in position during accommodation), enabling changes in lens shape for light focusing. When the ciliary muscle contracts, it pulls itself forward and moves the frontal region toward the axis of the eye. This releases the tension on the lens caused by the zonular fibers (fibers that hold or flatten the lens). This release of tension of the zonular fibers causes the lens to become more spherical, adapting to short range focus. The other way around, relaxation of the ciliary muscle causes the zonular fibers to become taut, flattening the lens, increasing the focal distance,[9] increasing long range focus. Although Helmholtz's theory has been widely accepted since 1855, its mechanism still remains controversial. Alternative theories of accommodation have been proposed by others, including L. Johnson, M. Tscherning, and Ronald A. Schachar.[2]

Contraction and relaxation of the longitudinal fibers, which insert into the trabecular meshwork in the anterior chamber of the eye, cause an increase and decrease in the meshwork pore size, respectively, facilitating and impeding aqueous humour flow into the canal of Schlemm.[10]

Postsynaptic sympathetic signals that originate in the superior cervical ganglion are carried by the nasociliary nerve or directly extend from the internal carotid plexus and pass through the ciliary ganglion. Sympathetic (adrenergic) activation of the muscle's beta-2 receptors result in relaxation and increase in ciliary body size. This tautens the zonule fibers and the lens is stretched flat, thereby decreasing its refractive power appropriately for far distance vision.

Presynaptic parasympathetic signals that originate in the Edinger-Westphal nucleus are carried by cranial nerve III (the oculomotor nerve) and travel through the ciliary ganglion. Parasympathetic activation of the M3 muscarinic receptors causes ciliary muscle contraction, the effect of contraction is to decrease the diameter of the ring of ciliary muscle. The zonule fibers relax and the lens becomes more spherical, increasing its power to refract light for near vision.

The adrenergic tone is dominant over the parasympathetic tone.[9]

Role in the treatment of glaucoma

Open-angle glaucoma (OAG) and closed-angle glaucoma (CAG) may be treated by muscarinic receptor agonists (e.g., pilocarpine), which cause rapid miosis and contraction of the ciliary muscles, opening the trabecular meshwork, facilitating drainage of the aqueous humour into the canal of Schlemm and ultimately decreasing intraocular pressure.[12]

The arteries of the choroid and iris. The greater part of the sclera has been removed. 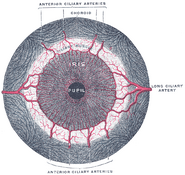