Corticosterone is a 21 carbon steroid hormone of the corticosteroid type produced in the cortex of the adrenal glands.

In many species, including amphibians, reptiles, rodents and birds, corticosterone is a main glucocorticoid,_The_Hormones_:_Corticoids-1|[1] involved in regulation of fuel, immune reactions, and stress responses.

However, in humans, corticosterone is produced primarily in the zona fasciculata of the adrenal cortex. It has only weak glucocorticoid and mineralocorticoid potencies in humans and is important mainly as an intermediate in the steroidogenic pathway from pregnenolone to aldosterone. Corticosterone is converted to aldosterone by aldosterone synthase, found only in the mitochondria of glomerulosa cells. Glomerulosa cells are found in the Zona glomerulosa, which is the most superficial region of endocrine cells in the adrenal cortex.

One example of a release pathway relates to UV-B stimulation on the skins of certain amphibians such as the Rough-skinned Newt, Taricha granulosa; this trigger seems to cause the internal generation of corticosterone in that species.[2] 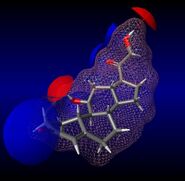