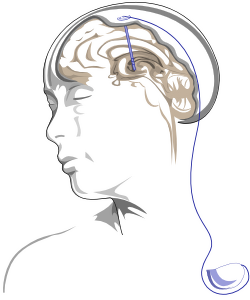 Deep brain stimulation (DBS) is one of a group of treatments involving surgical implantation of a medical device called a brain pacemaker, which sends electrical impulses to specific parts of the brain. This surgical procedure is used to treat severe essential tremor and tremor, rigidity and bradykinesia (slow movement) associated with Parkinson's disease, as well as primary dystonia and other conditions. Brain pacemakers were approved by the FDA in 1997 as a treatment for epilepsy[1] and Parkinson's disease as well as essential tremor [2] [3], and in April 2003 as a treatment for primary dystonia [4]. In March 2005, the results of a Canadian study performed by doctors from the University of Toronto were published indicating that DBS may also alleviate symptoms in patients suffering from treatment-resistant clinical depression.[5]

The surgery involves craniotomy for implantation of an electrode into the subthamalic nucleus or basal ganglia of the brain. The electrode is powered by a battery-operated neurostimulator typically placed under the collar bone. A connecting wire of platinum and iridium, insulated with polyurethane, conducts signals from the neurostimulator, which is hermetically sealed in a titanium housing. Electrical stimulation through the electrode interferes with neural activity at the target site (usually specific areas of the thalamus or the subthalamic nucleus and pallidum of the basal ganglia) which can alleviate tremors, rigidity or bradykinesia. The choice of target site depends on the symptoms being addressed. After the surgery is completed, an expert calibrates the unit in order to maximize its effectiveness. The programming of the neurostimulator can take up to a year to achieve an optimal setting.

Dr. Helen Mayberg of the University of Toronto, Dr. Andres Lozano of Toronto Western Hospital, and Dr. Sidney Kennedy of Canada's University Health Network (UHN) in 2005 reported in Neuron that electrical stimulation of a small area of the frontal cortex brought about a "striking and sustained remission" in four out of six patients suffering from clinical depression, whose symptoms had previously been resistant to medication, psychotherapy and electroconvulsive therapy.[1]

The researchers reported that, using brain imaging, they noticed that activity in the subgenual cingulate region (SCR or Brodmann area 25) — the lowest part of a band of tissue that runs along the midline of the brain — seemed to correlate with symptoms of sadness and depression. They implanted electrodes into six patients while they were locally anesthetised, but alert. While the current was switched on, four of the patients reported feeling a black cloud lifting, and became more alert and interested in their environments. The changes reversed when the current was switched off.

The effects of continuous SCR stimulation have produced sustained remission from depression in the four patients for six months, the team reported. When reporting the results, the team did caution that the trial was so small that the findings must be considered only provisional.

Deep brain stimulation has been used experimentally in treating a few patients with severe Tourette syndrome. In the treatment of Tourette's, it is an experimental and dangerous procedure, and is unlikely to become widespread. (Statement from the Tourette Syndrome Association.) There may be serious short- and long-term risks associated with DBS in persons with head and neck tics; the procedure is expensive and requires long-term expert care; benefits for severe Tourette's are not conclusive considering less robust effects of this surgery seen in the Netherlands; Tourette's is more common in pediatric populations and tends to remit in adulthood, so this would not be a recommended procedure to use on children; and how to use this procedure in Tourette's syndrome patients, is less clear than its usage in Parkinson's disease.

DBS has been found to significantly alleviate symptoms in two thirds of Parkinson's patients, and has recently been used more frequently to treat cases of severe essential tremor.

Although DBS is a procedure performed on the brain, it is FDA approved in the United States and carries the risks of major surgery.

The post-surgical complication rate is proportional to the experience of the surgical team with a tipping point of 50 DBS procedures and a cushion of 100 DBS procedures.

Depending upon usage, the battery in the neurostimulator must be replaced after three to five years. Due to the necessity to maintain an uncontaminated field within the body, the entire unit must be reimplanted. Nevertheless, this is a minor surgical procedure involving only the shallow subclavicular pocket where the neurostimulator resides.

Remaining battery life may be reliably determined with a telemetric programmer so that arrangements can be made to replace the unit prior to battery failure.

DBS has been applied to the treatment of , cluster headaches, and obesity. Although their clinical efficacy is not questioned, the mechanisms by which DBS works is still debated. Long-term clinical observation (Benabid et al. 2005) has shown that the mechanism is not due to a progressive lesion, given that interruption of stimulation reverses its effects. There is no current proof that long-term DBS is able to reset neural networks, or induce modifications of the functional organization/synaptic connectivity in the brain.