Educational attainment in the United States

The educational attainment of the US population is similar to that of many other industrialized countries with the vast majority of the population having completed secondary education and a rising number of college graduates that outnumber high school dropouts. As a whole the population of the United States is becoming increasingly more educated. Post-secondary education is valued very highly by American society and is one of the main determinants of class and status. As with income, however, there are significant discrepancies in terms of race, age, household configuration and geography.[1] Overall the households and demographics featuring the highest educational attainment in the United States are also among those with the highest household income and wealth. Thus, while the population of the US is becoming increasingly educated on all levels, a direct link between income and educational attainment remains.[1]

Overall, women have caught up to men in terms of completing secondary and post-secondary education with the gender gap almost completely closed. In 2003 there were more females completing high school than males. While there was a strong increase in the percentage of individuals with a Bachelor's degree or higher among both sexes, the percentage of females earning a four-year college degree increased by seven percentage points, while the percentage of males increased by four percentage points. It should be noted, however, that in 2003 males still earned more college degrees than women and that among the overall population there were slightly more men with a Bachelor's degree or higher than women. Overall, 29% of men had a four-year college degree, versus 26% of women. This contrasts with the completion of secondary education; 85% percent of women were high school graduates compared to 84% among men. The contrasting figures indicated that fewer women than men went on to college and earned a four-year degree. Comparing the percentages of those having earned a four-year degree with those having attended college without graduating further supports this assumption. While the differences between men and women with some college education was a mere one percentage point, the difference between men and women with a Bachelor's degree or higher was three percentage points.[1] Thus the gender gap seems to widen as educational attainment increases. During the 2000 Census, 1.4% of men had a doctorate, compared to only 0.6% of women.[2]

Educational attainment had a profound impact on income in the United States. While the incomes of both men and women increased significantly with higher educational attainment (the increase becoming larger with each level), the income gap between races and genders remained at each educational level. In 2003 average incomes ranged from $13,459 for a female high school dropout to $90,761 for a male with an advanced degree. The most significant average income increase was between those who had some college education or an Associates degree and those who had a Bachelor's degree. While the former averaged $31,046 for both sexes the latter averaged $51,194, over $20,000 (64.9%) more. The second most dramatic increase in average income was between those with a Bachelor's degree with $51,194 and those with an advanced degree who made $72,824, roughly $21,000 (42.2%) more. The least significant difference was between those who had graduated high school and those who had either some college or an Associates degree. Here the difference was a mere $3,766 or 13.8%. The difference between those with a high school diploma ($27,280) and those who did not complete high school ($18,826) was $8,454 or 45%. Overall the income in the United States for all sexes, races and levels of educational attainment was $36,308 annually.[1]

Among the races, educational attainment retain its dramatic effect on average income which varies significantly at each educational level. European Americans had the highest average income at every level of educational attainment. Since, however the proportion of those having college degrees is greater among Asian Americans than among non-Hispanic whites, the overall highest average income is found among Asians. All races except Whites ranked last on at least one level with African Americans ranking last on the non-high school, high school and advanced degree level. Asians second highest on the college graduate level and had the highest overall income among the general population had the lowest average annual income for those with some college education or an Associates degree. Racial income difference were also significant at every level of educational attainment with the largest racial inequality being between European and African Americans who did not complete high school and those with advanced college degrees. Overall European Americans with an advanced degree had the highest average annual income with $74,122. Asian Americans had the second highest with $72,852. Hispanics and African Americans had the lowest annual incomes among those with advanced degrees averaging $67,679 and $59,944 annually. The largest racial inequity was between European Americans with a Bachelor's degree who made $53,185 than Hispanics who made $12,263 or 29.9% less with an average annual income of $40,949.[1]

Educational attainment among the population aged 25 and above varied rather slightly with geography region. The population of the Northeastern United States, which had the smallest population of any region with thirty-six million residents, had the highest percentage of high-school and college graduates. The western United States had the highest pecentage of those with some college or an Associates degree and ranked second for college graduates. The South which had by far the largest population with roughly sixty-six million people had the lowest educational attainment at every level. The proportion of high school graduates was the largest in the mid-west while the proportion of those with some college or an Associates degree was the second and that of those with a Bachelor's degree or higher was the third largest of any region. Overall it is fair to assume that the Northeast followed by the Western states were the most educated regions in the US on the college level, with the Mid-west leading on the High-school level and the South falling behind on all levels.[1]

Educational attainment is one of the primary indicators of social class in the United States.[5] While the American social class system is vaguely defined concept with many contradicting theories,[6][7] educational attainment emerges as one of the top measurements of social class. Not only is a high educational attainment a status symbol by itself but it also is very closely related to the other two main indicators of social class: occupation and income. A graduate degree and the roughly seven to eight years of post-secondary education serve as the main requirement for entering "The professions" and becoming part of the professional middle class.[5] While education is not of as much value when considering the upper class, where status is simply passed down from generation to generation, it is key into becoming a more privileged member of the American middle class.[5][7] Overall, educational attainment is the main entrance barrier into more privileged parts of the middle class as it is not only of high value but is also the requirement for becoming a professional and earning the corresponding income.[5] The only exception are entrepreneurs who can rank anywhere in the class system but are usually not referred to as professional middle class unless they are of the professions.

In the United States it also important to differentiate between the statistical middle class, often defined as consisting of those who are neither rich nor poor, and the professional middle class. Recent research has shown that not only is the statistical middle of society (those with income roughly 80% to 120% of the national median or members of the mid-quintile) no longer able to afford the lifestyle indicative of the middle class,[8] but there also seems to a widening income gap in between those who may be described as being middle class. Those in the statisical middle may have to fear lay-offs and cost-cutting downsizing as well as out-sourcing, while those in the professional middle class are largely immune to economic fluctuations and can enjoy upper-middle range incomes even in the face of recessions. As stated above education is the main requirement of becoming a member of the professional middle class and thus is also key to economic security as well as comfortable lifestyle.[5] 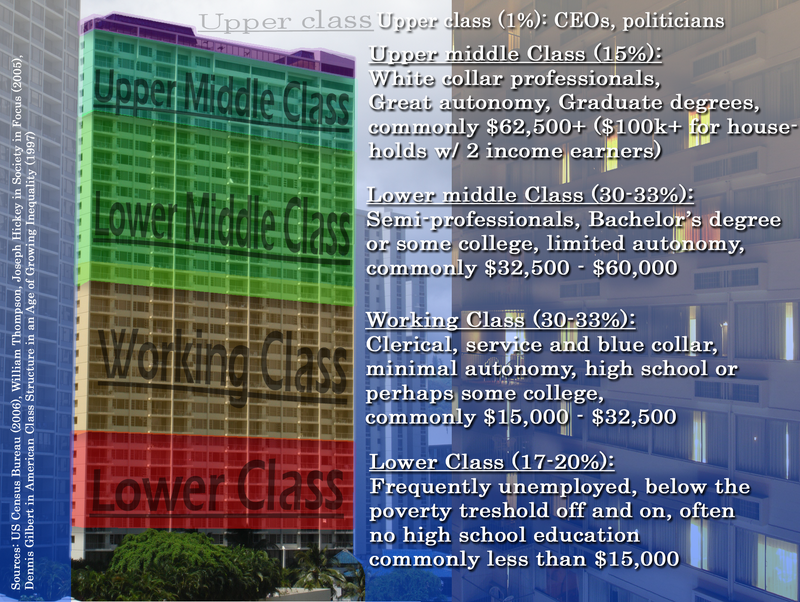