Classical electrophysiology techniques involve placing electrodes into various preparations of biological tissue. The principal types of electrodes are: 1) simple solid conductors, such as discs and needles (singles or arrays), 2) tracings on printed circuit boards, and 3) hollow tubes filled with an electrolyte, such as glass pippettes. The principal preparations include 1) living organisms, 2) excised tissue (acute or cultured), 3) dissociated cells from excised tissue (acute or cultured), 4) artificially grown cells or tissues, or 5) hybrids of the above.

If an electrode is small enough (micrometres) in diameter, then the electrophysiologist may choose to insert the tip into a single cell. Such a configuration allows direct observation and recording of the intracellular electrical activity of a single cell. However, at the same time such invasive setup reduces the life of the cell. Intracellular activity may also be observed using a specially formed (hollow) glass pipette. In this technique, the microscopic pipette tip is pressed against the cell membrane, to which it tightly adheres. The electrolyte within the pipette may be brought into fluid continuity with the cytoplasm by delivering a pulse of pressure to the electrolyte in order to rupture the small patch of membrane encircled by the pipette rim (whole cell recording). Alternatively, ionic continuity may be established by "perforating" the patch by allowing exogenous ion channels within the electrolyte to insert themselves into the membrane patch (perforated patch recording). Finally, the patch may be left intact (patch recording).

The electrophysiologist may choose not to insert the tip into a single cell. Instead, the electrode tip may be left in continuity with the extracellular space. If the tip is small enough, such a configuration may allow indirect observation and recording of the electrical activity of a single cell, and is termed single unit recording. Depending on the preparation and precise placement, an extracellular configuration may pick up the activity of several nearby cells simultaneously, and this is termed multi-unit recording.

Other classical electrophysiological techniques include single channel recording and amperometry.

Optical electrophysiological techniques were created by scientists and engineers to overcome one of the main limitations of classical techniques. Classical techniques allow observation of electrical activity at approximately a single point within a volume of tissue. Essentially, classical techniques singularize a distributed phenomenon. Interest in the spatial distribution of bioelectric activity prompted development of molecules capable of emitting light in response to their electrical or chemical environment. Examples are voltage sensitive dyes and fluoresceing proteins. After introducing one or more such compounds into tissue via perfusion, injection or gene expression, the 1 or 2-dimensional distribution of electrical activity may be observed and recorded.

Intracellular recording involves measuring voltage and/or current across the membrane of a cell. To make an intracellular recording, the tip of a fine (sharp) microelectrode must be inserted inside the cell, so that the membrane potential can be measured. Typically, the resting membrane potential of a healthy cell will be -60 to -80 mV, and during an action potential the membrane potential might reach +40 mV. In 1963, Alan Lloyd Hodgkin and Andrew Fielding Huxley won the Nobel Prize in Physiology or Medicine for their contribution to understanding the mechanisms underlying the generation of action potentials in neurons. Their experiments involved intracellular recordings from the giant axon of Atlantic squid (Loligo pealei), and were among the first applications of the "voltage clamp" technique. Today, most microelectrodes used for intracellular recording are glass micropipettes, with a tip diameter of < 1 micrometre, and a resistance of several megaohms. The micropipettes are filled with a solution that has a similar ionic composition to the intracellular fluid of the cell. A chlorided silver wire inserted in to the pipet connects the electrolyte electrically to the amplifier and signal processing circuit. The voltage measured by the electrode is compared to the voltage of a reference electrode, usually a silver-silver chloride wire in contact with the extracellular fluid around the cell. In general, the smaller the electrode tip, the higher its electrical resistance, so an electrode is a compromise between size (small enough to penetrate a single cell with minimum damage to the cell) and resistance (low enough so that small neuronal signals can be discerned from thermal noise in the electrode tip).

The voltage clamp technique allows an experimenter to "clamp" the cell potential at a chosen value. This makes it possible to measure how much ionic current crosses a cell's membrane at any given voltage. This is important because many of the ion channels in the membrane of a neuron are voltage gated ion channels, which open only when the membrane voltage is within a certain range. Voltage clamp measurements of current are made possible by the near-simultaneous digital subtraction of transient capacitive currents that pass as the recording electrode and cell membrane are charged to alter the cell's potential. (See main article on voltage clamp.)

Most current-clamp amplifiers provide little or no amplification of the voltage changes recorded from the cell. The "amplifier" is actually an electrometer, sometimes referred to as a "unity gain amplifier"; its main job is to change the nature of small signals (in the mV range) produced by cells so that they can be accurately recorded by low-impedance electronics. The amplifier increases the current behind the signal while decreasing the resistance over which that current passes. Consider this example based on Ohm's law: a voltage of 10 mV is generated by passing 10 nanoamperes of current across 1 MΩ of resistance. The electrometer changes this "high impedance signal" to a "low impedance signal" by using a voltage follower circuit. A voltage follower reads the voltage on the input (caused by a small current through a big resistor). It then instructs a parallel circuit that has a large current source behind it (the electrical mains) and adjusts the resistance of that parallel circuit to give the same output voltage, but across a lower resistance.

This technique was developed by Erwin Neher and Bert Sakmann who received the Nobel Prize in 1991. Conventional intracellular recording involves impaling a cell with a fine electrode; patch-clamp recording takes a different approach. A patch-clamp microelectrode is a micropipette with a relatively large tip diameter. The microelectrode is placed next to a cell, and gentle suction is applied through the microelectrode to draw a piece of the cell membrane (the 'patch') into the microelectrode tip; the glass tip forms a high resistance 'seal' with the cell membrane. This configuration is the "cell-attached" mode, and it can be used for studying the activity of the ion channels that are present in the patch of membrane. If more suction is now applied, the small patch of membrane in the electrode tip can be displaced, leaving the electrode sealed to the rest of the cell. This "whole-cell" mode allows very stable intracellular recording. A disadvantage (compared to conventional intracellular recording with sharp electrodes) is that the intracellular fluid of the cell mixes with the solution inside the recording electrode, and so some important components of the intracellular fluid can be diluted. A variant of this technique, the "perforated patch" technique, tries to minimise these problems. Instead of applying suction to displace the membrane patch from the electrode tip, it is also possible to withdraw the electrode from the cell, pulling the patch of membrane away from the rest of the cell. This approach enables the membrane properties of the patch to be analysed pharmacologically.

In situations where one wants to record the potential inside the cell membrane with minimal effect on the ionic constitution of the intracellular fluid a sharp electrode can be used. These micropipets (electrodes) are again like those for patch clamp pulled from glass capillaries, but the pore is much smaller so that there is very little ion exchange between the intracellular fluid and the electrlolyte in the pipete. The resistance of the electrode in 10s or 100s of MΩ in this case. Often the tip of the electrode is filled with various kinds of dyes like Lucifer yellow to fill the cells recorded from, for later confirmation of their morphology under a microscope. The dyes are injected by applying a positive or negative, DC or pulsed voltage to the electrodes depending on the polarity of the dye.

Amperometry uses a carbon electrode to record changes in the chemical composition of the oxidized components of a biological solution. Oxidation and reduction is accomplished by changing the voltage at the active surface of the recording electrode in a process known as "scanning". Because certain brain chemicals lose or gain electrons at characteristic voltages, individual species can be identified. Amperometry has been used for studying exocytosis in the neural and endocrine systems. Many monoamine neurotransmitters, e.g., norepinephrine (noradrenalin), dopamine, serotonin (5-HT), are oxidizable. The method can also be used with cells that do not secrete oxidizable neurotransmitters by "loading" them with 5-HT or dopamine.

Planar patch clamp is a novel method developed for high throughput electrophysiology. Instead of positioning a pipette on an adherent cell, cell suspension is pipetted on a chip containing a microstructured aperture. 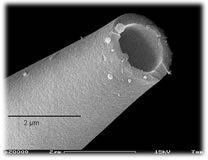 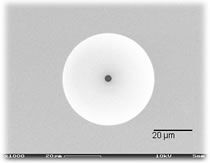 A single cell is then positioned on the hole by suction and a tight connection (Gigaseal) is formed. The planar geometry offers a variety of advantages compared to the classical experiment: - it allows for integration of microfluidics, which enables automatic compound application for ion channel screening. - the system is accessible for optical or scanning probe techniques - perfusion of the intracellular side can be performed.