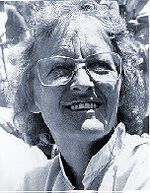 Elisabeth Kübler-Ross, M.D. (July 8, 1926 - August 24, 2004) was a psychiatrist and the author of the groundbreaking book On Death and Dying, where she first discussed what is now known as the Kübler-Ross model.

Kübler-Ross was born in Zürich, Switzerland and graduated from the University of Zürich medical school in 1957. She moved to the United States in 1958 to work and continue her studies in New York.

As she began her practice, she was appalled by the hospital treatment of patients who were dying. She began giving a series of lectures featuring terminally ill patients, forcing medical students to confront people who were dying. Her extensive work with the dying led to On Death and Dying in 1969. She wrote over 20 additional books on the subject of dying.

She also proposed the now famous Five Stages of Grief as a pattern of phases, most or all of which people tend to go through, in sequence, after being faced with the tragedy of their own impending death. The five stages of grief, in sequential order, are denial, anger, bargaining, depression, and acceptance. The five stages have since been adopted by many as applying to the survivors of a loved one's death, as well.

She did not found the hospice care movement, but its adherents credit her with encouraging it. Kübler-Ross completed her degree in psychiatry at the University of Colorado] in [1963 and has also received 23 honorary doctorates.

In later life, Kubler-Ross became interested in out-of-body experiences and mediumistic attempts to contact the dead. This led to a scandal connected with one medium, as well as attacks on her healing centers.

Kübler-Ross suffered a series of strokes in 1995 which left her partially paralyzed on her left side. In a 2002 interview with The Arizona Republic, she stated that she was ready for death. She died in 2004 at her home in Scottsdale, Arizona.