The ENS is capable of autonomous functions[3] such as the coordination of reflexes; although it receives considerable innervation from the autonomic nervous system, it can and does operate independently of the brain and the spinal cord.[4] Its study is the focus of neurogastroenterology.
ENS function can be damaged by ischemia.[5] Transplantation, which had been described as a theoretical possibility in earlier versions of this article,[6] is now (2011) a clinical reality in the United States and is performed at a number of approved centers.[7]

In vertebrates the enteric nervous system includes efferent neurons, afferent neurons, and interneurons, all of which make the enteric nervous system capable of carrying reflexes and acting as an integrating center in the absence of CNS input. The sensory neurons report on mechanical and chemical conditions. Through intestinal muscles, the motor neurons control peristalsis and churning of intestinal contents. Other neurons control the secretion of enzymes. The enteric nervous system also makes use of more than 30 neurotransmitters, most of which are identical to the ones found in CNS, such as acetylcholine, dopamine, and serotonin. More than 90% of the body's serotonin lies in the gut; as well as about 50% of the body's dopamine, which is currently being studied to further our understanding of its utility in the brain.[12]

The enteric nervous system has the capacity to alter its response depending on such factors as bulk and nutrient composition. In addition, ENS contains support cells which are similar to astroglia of the brain and a diffusion barrier around the capillaries surrounding ganglia which is similar to the blood–brain barrier of cerebral blood vessels.[13] 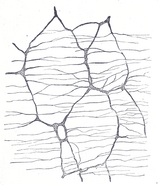 The myenteric plexus of a rabbit. X 50. 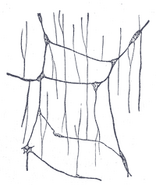 The submucosal plexus of a rabbit. X 50.