Ergoline is a chemical compound whose structural skeleton is contained in a diverse range of alkaloids and a few psychedelic drugs (ololiuhqui, LSD). Ergoline derivitives are used clinically for the purpose of vasoconstriction (5-HT 1 Agonists - Ergotamine) and in the treatment of migraine (used with caffeine) and Parkinson's disease, some are implicated in the disease ergotism. Ergometrine and ergotamine are listed as Table I precursors under the United Nations Convention Against Illicit Traffic in Narcotic Drugs and Psychotropic Substances.[1]

There are three main classes of ergoline derivatives, the water-soluble amides of lysergic acid, the water-insoluble ergopeptines (i.e., ergopeptides), and the clavine group.[2]

The relationship between these compounds is summarized in the following structural formula and table of substitutions. 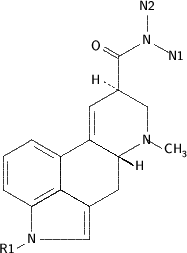 These compounds have a tripeptide structure attached to the basic ergoline ring, in the same location as the amide group of the lysergic acid derivatives. This tripeptide moiety contains an unusual cyclol bond >N-C(OH)< at the juncture between the two lactam rings. Some of the important ergopeptines (also known as ergopeptides) are summarized below. In addition to the following ergopeptines, a commonly encountered term is ergotoxine, which refers to a mixture of equal proportions of ergocristine, ergocornine and ergocryptine. 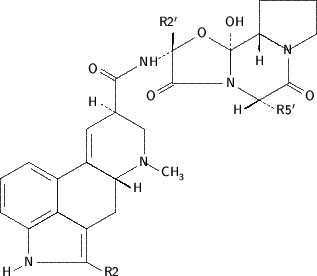 A variety of modifications to the basic ergoline are seen in nature, for example agroclavine, elymoclavine, lysergol. Those deriving from dimethylergoline are referred to as clavines.

Some synthetic ergoline derivatives do fall easily into any of the above groups. Some examples are:

Ergoline alkaloids were first isolated from ergot, a fungus that infects grain and causes the disease ergotism. Ergot also has a long history of medicinal use, which led to attempts to characterize its activity chemically. This began in 1907 with the isolation by G. Barger and F. H. Carrin of ergotoxine, so-named since it appeared to exhibit more of the toxicity of ergot than its therapeutic qualities. With the isolation of ergotamine in 1918 by A. Stoll came the first therapeutic use of isolated ergoline alkaloids.

With the determination of the basic chemical structure of the ergot alkaloids in the early 1930s, an era of intensive exploration of synthetic derivatives began. In addition to the naturally occurring ergonovine (used as an oxytocic) and ergotamine (an analgesic used to control migraine), synthetic derivatives of continuing importance today are the oxytocic methergine, the anti-migraine drugs dihydroergotamine and methysergide, the anti-senility nootropic (smart drug) Hydergine™ (a mixture of dihydroergotoxine mesylates, INN: ergoline mesylates), and bromocriptine, used for numerous purposes including treatment of Parkinson's disease. Newer synthetic ergolines used for Parkinson's disease include pergolide and lisuride. Perhaps the most famous ergoline derivative of all is the psychedelic drug LSD.

In 1960, Albert Hofmann (discoverer of methergine, dihydroergotamine, Hydergine and LSD) delivered a speech that was to cause shockwaves of incredulity and even disbelief in the scientific community. Ergoline alkaloids, previously only known from the lower fungi, had been found in two species of flowering plants. These were the Mexican species Rivea corymbosa and Ipomoea violacea of the Convolvulaceae (morning glory) family, the seeds of which were identified as the psychedelic plant drugs known as "ololiuhqui" and "tlitliltzin". Hofmann's result was later confirmed by other studies. The principal alkaloids in the seeds are ergine and its optical isomer isoergine, with several other lysergic acid derivatives and clavines present in lesser amounts. The Hawaiian species Argyreia nervosa was later found to include similar alkaloids. It is possible, though not proven, that ergine and/or isoergine are responsible for the hallucinogenic effects.

However, recent results show that the alkaloids found in Convolvulaceae are produced by a seed-transmitted epiphytic clavicipitaceous fungus.[3]