Estimation theory is a branch of statistics and signal processing that deals with estimating the values of parameters based on measured/empirical data that has a random component. The parameters describe an underlying physical setting in such a way that their value affects the distribution of the measured data. An estimator attempts to approximate the unknown parameters using the measurements.

For example, it is desired to estimate the proportion of a population of voters who will vote for a particular candidate. That proportion is the unobservable parameter; the estimate is based on a small random sample of voters.

Or, for example, in radar the goal is to estimate the range of objects (airplanes, boats, etc.) by analyzing the two-way transit timing of received echoes of transmitted pulses. Since the reflected pulses are unavoidably embedded in electrical noise, their measured values are randomly distributed, so that the transit time must be estimated.

In estimation theory, it is assumed the measured data is random with probability distribution dependent on the parameters of interest. For example, in electrical communication theory, the measurements which contain information regarding the parameters of interest are often associated with a noisy signal. Without randomness, or noise, the problem would be deterministic and estimation would not be needed.

The entire purpose of estimation theory is to arrive at an estimator, and preferably an implementable one that could actually be used. The estimator takes the measured data as input and produces an estimate of the parameters.

It is also preferable to derive an estimator that exhibits optimality. Estimator optimality usually refers to achieving minimum average error over some class of estimators, for example, a minimum variance unbiased estimator. In this case, the class is the set of unbiased estimators, and the average error measure is variance (average squared error between the value of the estimate and the parameter). However, optimal estimators do not always exist.

These are the general steps to arrive at an estimator:

After arriving at an estimator, real data might show that the model used to derive the estimator is incorrect, which may require repeating these steps to find a new estimator. A non-implementable or infeasible estimator may need to be scrapped and the process started anew.

In summary, the estimator estimates the parameters of a physical model based on measured data.

To build a model, several statistical "ingredients" need to be known. These are needed to ensure the estimator has some mathematical tractability instead of being based on "good feel".

The first is a set of statistical samples taken from a random vector (RV) of size N. Put into a vector, 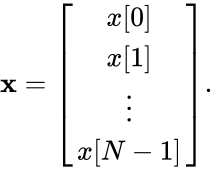 Secondly, we have the corresponding M parameters

which need to be established with their continuous probability density function (pdf) or its discrete counterpart, the probability mass function (pmf)

It is also possible for the parameters themselves to have a probability distribution (e.g., Bayesian statistics). It is then necessary to define the Bayesian probability

After the model is formed, the goal is to estimate the parameters, commonly denoted

, where the "hat" indicates the estimate.

One common estimator is the minimum mean squared error estimator, which utilizes the error between the estimated parameters and the actual value of the parameters

as the basis for optimality. This error term is then squared and minimized for the MMSE estimator.

Commonly used estimators and estimation methods, and topics related to them:

independent samples that consists of an unknown constant

). Since the variance is known then the only unknown parameter is

The model for the signal is then

Two possible (of many) estimators are:

Both of these estimators have a mean of

, which can be shown through taking the expected value of each estimator

At this point, these two estimators would appear to perform the same. However, the difference between them becomes apparent when comparing the variances.

It would seem that the sample mean is a better estimator since its variance is lower for every N>1.

Continuing the example using the maximum likelihood estimator, the probability density function (pdf) of the noise for one sample

and the probability of

can be thought of a

By independence, the probability of

Taking the natural logarithm of the pdf

and the maximum likelihood estimator is

Taking the first derivative of the log-likelihood function

and setting it to zero

This results in the maximum likelihood estimator

samples of a fixed, unknown parameter corrupted by AWGN.

For more details on this topic, see Cramér–Rao bound.

To find the Cramér–Rao lower bound (CRLB) of the sample mean estimator, it is first necessary to find the Fisher information number

and copying from above

Finally, putting the Fisher information into

. In other words, the sample mean is the (necessarily unique) efficient estimator, and thus also the minimum variance unbiased estimator (MVUE), in addition to being the maximum likelihood estimator.

Maximum of a uniform distribution

One of the simplest non-trivial examples of estimation is the estimation of the maximum of a uniform distribution. It is used as a hands-on classroom exercise and to illustrate basic principles of estimation theory. Further, in the case of estimation based on a single sample, it demonstrates philosophical issues and possible misunderstandings in the use of maximum likelihood estimators and likelihood functions.

Given a discrete uniform distribution

with unknown maximum, the UMVU estimator for the maximum is given by

The formula may be understood intuitively as:

"The sample maximum plus the average gap between observations in the sample",

the gap being added to compensate for the negative bias of the sample maximum as an estimator for the population maximum.[note 1]

This has a variance of[1]

so a standard deviation of approximately

, the (population) average size of a gap between samples; compare

above. This can be seen as a very simple case of maximum spacing estimation.

The sample maximum is the maximum likelihood estimator for the population maximum, but, as discussed above, it is biased.

Numerous fields require the use of estimation theory. Some of these fields include (but are by no means limited to):

Measured data are likely to be subject to noise or uncertainty and it is through statistical probability that optimal solutions are sought to extract as much information from the data as possible.