Psychology Wiki
Register
Don't have an account?
Sign In
Advertisement
in: Swiss psychiatrists, History of neuroscience, History of schizophrenia

Paul Eugen Bleuler (b. 30 April, 1857 - d. 9 February, 1940) was a Swiss psychiatrist most notable for his contributions to the understanding of mental illness and the naming of schizophrenia. 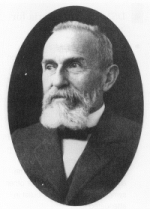 Bleuler was born in Zollikon, a small town near Zürich in Switzerland. He studied medicine in Zürich, and later studied in Paris, London and Munich after which he returned to Zürich to take a post as an intern at the Burghölzli, a university hospital.

In 1886 Bleuler became the director of a psychiatric clinic at Rheinau, a hospital located in an old monastery on an island in the Rhine. Rheinau was noted at the time for being backward, and Bleuler set about improving conditions for the patients resident there.

Bleuler returned to the Burghölzli in 1898 to be appointed director, where notably he employed Carl Jung as an intern.

Bleuler is particularly notable for naming schizophrenia, a disorder which was previously known as dementia praecox. Bleuler realised the condition was neither a dementia, nor did it always occur in young people (praecox meaning early) and so gave the condition the name from the Greek for split (schizo) and mind (phrene).

According to the Critical Dictionary of Psychoanalysis by Charles Rycroft, it was Bleuler who introduced the term 'ambivalence', in 1911; the Oxford English Dictionary states that he also named 'autism' in a 1912 edition of the American Journal of Insanity.

Interestingly, and against the Kraepelinian view popular at the time, Bleuler did not believe that there was a clear separation between sanity and madness.