In traditional Chinese philosophy, natural phenomena can be classified into the Five Elements (Template:Zh-c; pinyin: wǔxíng

The doctrine of five phases describes both a generating (生, shēng) cycle and an overcoming or restraining (克, kè) cycle of interactions between the phases. In the generating cycle, wood generates fire; fire generates earth (ash); earth generates metal; metal generates water (if metal is left out at night water will have condensed on it by morning); water generates wood. In the overcoming cycle, wood grows in earth; earth absorbs water; water quenches fire; fire melts metal; metal cuts wood. 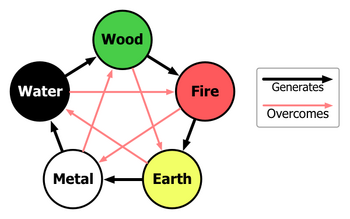 The doctrine of five phases was employed in many fields of early Chinese philosophy, including seemingly disparate fields such as music, traditional Chinese medicine, and military strategy.

Correlations between the five elements and other categories

(note: The Chinese word 青 includes the range in the spectrum from green to blue, with shades down to black.)

Some other correspondences are shown below:

The elements have also been correlated to the eight trigrams of the I Ching:

The Five Elements appear in the movie "The Mystery of Chess Boxing", where the Ghostface Killer (later a member of the wu-tang clan) uses the a kung-fu style called the five-elements. A chessmaster learns the style, so that he can use the correct element to defeat whatever element the Ghostface Killer is using. It has memorable quotes such as "Five Elements! and first the gold!" "Fire melts gold, earth absorbs water" and last but not least, "I don't think your wood can overcome anything!".