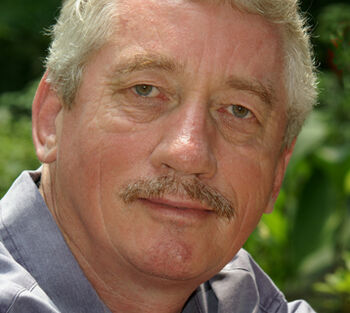 Frans B.M. de Waal, PhD (b. 1948, Utrecht, the Netherlands) is a psychologist, primatologist and ethologist. He is the C.H. Chandler professor of Primate Behavior in the Emory University psychology department in Atlanta, Georgia, and director of the Living Links Center at the Yerkes National Primate Research Center and author of numerous books including "Chimpanzee Politics" and "Our Inner Ape." His research centers on primate social behavior, including conflict resolution, cooperation, inequity aversion, and food-sharing. In 1993, he was elected to the Royal Dutch Academy of Sciences, and was elected as a foreign associate of the United States National Academy of Sciences in 2004.

In 1977, de Waal received his doctorate in biology from Utrecht University after training as a zoologist and ethologist. His dissertation research concerned aggressive behavior and alliance formation in macaques.

In 1975, de Waal began a six-year project on the world's largest captive colony of chimpanzees at the Arnhem Zoo. The study resulted in many scientific papers, and resulted in publication of his first book, Chimpanzee Politics, in 1982.

His research into the innate capacity for empathy among primates has led de Waal to the conclusion that non-human great apes and humans are simply different types of apes, and that there is little difference between these species, except that humans walk on two legs.

His book, Our Inner Ape, examines human behavior through the eyes of a primatologist, using the behavior of Common Chimpanzees and Bonobos as metaphors for human psychology.

People such as primatologists and zoo keepers who work on a daily basis with apes, always have a high opinion of apes' intelligence and abilities. Those who attempt to minimize apes' language abilities and cognitive skills are always people with little or no first-hand experience with apes.

"The possibility that empathy resides in parts of the brain so ancient that we share them with rats should give pause to anyone comparing politicians with those poor, underestimated creatures." Frans de Waal

Professor de Waal once spoke to a group of Behaviorist psychologists about reconciliation among chimpanzees. They refused to accept this, insisting that reconciliation can only happen in Homo sapiens. De Waal invited them to witness the chimps reconciling. They declined, claiming that first-hand observation would destroy their "scientific objectivity." They were behaving just like the Aristotelian scholars who refused to look through the telescope of Galileo.