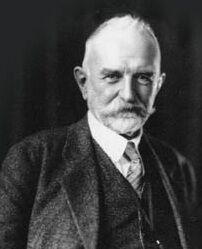 George Herbert Mead (February 27,1863 – April 26,1931) was an American philosopher, sociologist and psychologist, primarily affiliated with the University of Chicago, where he was one of several distinguished pragmatists. He is regarded as one of the founders of social psychology.

Mead was born February 27, 1863 in South Hadley, Massachusetts. He studied at Oberlin College from 1879–1883 and spent several years as a railroad surveyor prior to his enrollment in Harvard University in 1887. At Harvard, Mead studied with Josiah Royce, a major influence upon his thought, and William James, whose children he tutored. In 1888, Mead moved to Germany to study with psychologist Wilhelm Wundt, from whom he learned the concept of "the gesture", a concept central to his latter work. Despite never finishing his dissertation, Mead was able to obtain a post at the University of Michigan in 1891. In 1894 Mead moved, along with John Dewey, to the University of Chicago, where he taught until his death. No detached philosopher, he was active in Chicago's social and political affairs; among his many activities include his work for the City Club of Chicago. Mead died of heart failure, April 26, 1931.

Mead is a major American philosopher by virtue of being, along with Charles Peirce and William James, one of the founders of pragmatism. Mead is also an important figure in 20th century social philosophy. His theory of how the mind and self emerge from the social process of communication by signs founded the symbolic interactionist school of sociology and social psychology. He also made significant contributions to the philosophies of nature, science, and history, to philosophical anthropology, and to process philosophy. Dewey and Alfred North Whitehead considered Mead a thinker of the first rank. He is a classic example of social theorist whose work does not fit easily within conventional disciplinary boundaries.

Mead the social psychologist argued the antipositivistic view that the individual is a product of society, the self arising out of social experience as an object of socially symbolic gestures and interactions. Rooted intellectually in Hegelian dialectics, theories of action, and an amended "anti-Watsonian" social behaviourism, Mead’s self was a self of practical and pragmatic intentions.

Mead grounded human perception in an "action-nexus" (Joas 1985: 148), ingraining the individual in a "manipulatory phase of the act" as the fundamental “means of living” (Mead 1982: 120). In this manipulatory sphere “the individual abides with the physical objects” of everyday life (Mead 1938: 267). In humans the "manipulatory phase of the act" is socially mediated, that is to say, in acting towards objects humans simultaneously take the perspectives of others towards that object. This is what Mead means by "the social act" as opposed to simply "the act" (the latter being a Deweyan concept). Non-human animals also manipulate objects, but this is a non-social manipulation, they do not take the perspective of other organisms toward the object. Humans are unique in taking the perspective of other actors towards objects, but this is what enables complex human society and subtle social coordination. In the social act of economic exachange, for example, both buyer and seller must take each other's perspectives towards the object being exchanged. The seller must recognize the value for the buyer, while the buyer must recognize the desirability of money for the seller. Only with this mutual perspective taking can the economic exchange occur.

Mead also rooted the self’s “perception and meaning” deeply and sociologically in "a common praxis of subjects" (Joas 1985: 166) found specifically in social encounters. Understood as a combination of the 'I' and the 'me', Mead’s self proves to be noticeably entwined within a sociological existence: For Mead, existence in community comes before individual consciousness. First one must participate in the different social positions within society and only subsequently can one use that experience to take the perspective of others and thus become self-conscious.

Mead writes in Mind, Self and Society that human beings begin their understanding of the social world through "play" and "game". "Play" comes first in the child's development. The child takes different roles he/she observes in "adult" society, and plays them out to gain an understanding of the different social roles. For instance, he first plays the role of policeman and then the role of thief. When more mature, the child can participate in the game, for instance the game of baseball. In the game he has to relate to others and understand the rules of the game. Through participating in the "game", he gains the understanding that he has to relate to norms of behaviour in order to be accepted as a player. Mead calls this the child's first encounter with "the generalized other", which is one of the main concepts Mead proposes for understanding the emergence of the (social) self in human beings. "The generalized other" can be understood as the general norm within a social group or setting. Through understanding "the generalized other" the individual understands what kind of behaviour is expected, appropriate and so on, in different social settings. The family, the baseball team, school, and society are examples of social settings through which the child develops gradual understanding of norms for behaviour. Mead distinguishes between the "I" and the "me." The "me" is the accumulated understanding of "the generalized other" i.e. norms, unconscious opinions, patterns of social response etc. The "I" is the more personal opinions, the reflecter or observer, the social struggler -- it is what creates the individual's individuality. It is important when reading Mead to remember that he sees the human mind as something that can arise solely through social experience. The thinking process, for instance, is for Mead nothing but internalized comunication.

Philosophers whose inspiration is more metaphysical and ontological, e.g. Heidegger, emphasize the development of Being from the perspective of the experiencing human being, and how the world is revealed to this experiencing entity within a realm of things. Pragmatic philosophers like Mead focus on the development of the self and the objectivity of the world within the social realm: that "the individual mind can exist only in relation to other minds with shared meanings" (Mead 1982: 5).

In his lifetime, Mead published about 100 scholarly articles, reviews, and incidental pieces. At the moment of death, he was correcting the galleys to what would have been his first book Essays in Social Psychology, published only in 2001. His students and colleagues, especially Charles W. Morris, subsequently put together five books from his unpublished manuscripts and from stenographic records of his lectures. The Mead Project at Brock University in Ontario intends to publish eventually all of Mead's 80-odd remaining unpublished mss.