Histidine is one of the 20 most common natural amino acids present in proteins. In the nutritional sense, in humans, histidine is considered an essential amino acid, but mostly only in children. The imidazole side chains and the relatively neutral pKa of histidine (ca 6.0) mean that relatively small shifts in cellular pH will change its charge. For this reason, this amino acid side chain finds its way into considerable use as a co-ordinating ligand in metalloproteins, and also as a catalytic site in certain enzymes. The imidazole side chain has two nitrogens with different properties: One is bound to hydrogen and donates its lone pair to the aromatic ring and as such is slighty acidic, whereas the other one donates only one electron to the ring so it has a free lone pair and is basic. These properties are exploited in different ways in proteins. In catalytic triads, the basic nitrogen of histidine is used to abstract a proton from serine, threonine or cysteine to activate it as a nucleophile. In a histidine proton shuttle, histidine is used to quickly shuttle protons, it can do this by abstracting a proton with its basic nitrogen to make a positively-charged intermediate and then use another molecule, a buffer, to extract the proton from its acidic nitrogen. In carbonic anhydrases, a histidine proton shuttle is utilized to rapidly shuttle protons away from a zinc-bound water molecule to quickly regenerate the active form of the enzyme.

The amino acid is a precursor for histamine and carnosine biosynthesis.

Histidine is found in fruits such as bananas and grapes, meat and poultry, and milk and milk products. It is also found in root vegetables and all green vegetables, though in lesser quantities.

There are two enantiomers: D-histidine and L-histidine. 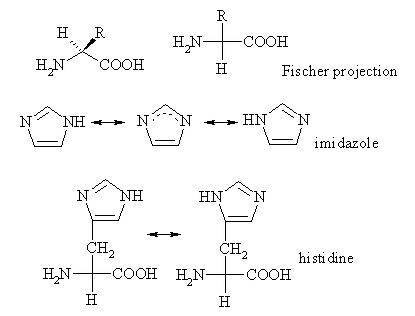 For a thorough scientific overview of disorders of histidine metabolism, one can consult chapter 80 of OMMBID[1]. For more online resources and references, see inborn errors of metabolism.