The lateral or horizontal canal (external semicircular canal) is the shortest of the three canals. Movement of fluid within this canal corresponds to rotation of the head around a vertical axis (i.e. the neck).

It measures from 12 to 15 mm., and its arch is directed horizontally backward and lateralward; thus each semicircular canal stands at right angles to the other two. 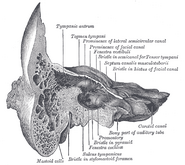 The cochlea and vestibule, viewed from above.