Template:Infobox Vein The inferior vena cava (or IVC) is the large vein that carries de-oxygenated blood from the lower half of the body into the heart.

It is posterior to the abdominal cavity and runs alongside of the vertebral column on its right side (i.e. it is a retroperitoneal structure). It enters the right atrium at the lower right, back side of the heart.

The IVC is formed by the joining of the left and right common iliac veins and brings blood into the right atrium of the heart. It also anastomoses with the azygos vein system (which runs on the right side of the vertebral column) and the venous plexuses next to the spinal cord.

The caval opening is at T8. The specific levels of the branches are as follows:

Because the IVC is not centrally located, there are some asymmetries in drainage patterns. The gonadal veins and suprarenal veins drain into the IVC on the right side, but into the renal vein on the left side, which in turn drains into the IVC. By contrast, all the lumbar veins and hepatic veins usually drain directly into the IVC.

Note that the vein that carries de-oxygenated blood from the upper half of the body is the superior vena cava.

Pathologies associated with the IVC

Health problems attributed to the IVC are most often associated with it being compressed (ruptures are rare because it has a low intraluminal pressure). Typical sources of external pressure are an enlarged aorta (abdominal aortic aneurysm), the gravid uterus (aortocaval compression syndrome) and abdominal maligancies, such as colorectal cancer, renal cell carcinoma and ovarian cancer. Since the inferior vena cava is primarily a right-sided structure, unconscious pregnant females should be turned on to their left side (the recovery position), to relieve pressure on it and facilitate venous return. In rare cases, straining associated with defecation can lead to restricted blood flow through the IVC and result in syncope (fainting).[1]

Occlusion of the IVC is rare, but considered life-threatening and is an emergency. It is associated with deep vein thrombosis, IVC filters, liver transplantation and instrumentation (e.g. catheter in the femoral vein).[2]

In the embryo, the IVC and right atrium are separated by the Eustachian valve, also known in Latin as the valvula venae cavae inferiore (valve of the inferior vena cava). In the adult, this structure typically has totally regressed or remains as a small endocardial fold.[3]

Gray480.png
Diagram showing completion of development of the parietal veins.
Gray491.png
Base and diaphragmatic surface of heart. 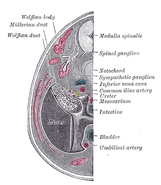 Transverse section of human embryo eight and a half to nine weeks old.
Illu liver gallbladder.jpg
Liver and gallbladder