A common use of the Ishikawa diagram is in product design, to identify desirable factors leading to an overall effect. Mazda Motors famously used a Ishikawa diagram in the development of the Miata sports car, where the required result was "Jinba Ittai" or "Horse and Rider as One". The main causes included such aspects as "touch" and "braking" with the lesser causes including highly granular factors such as "50/50 weight distribution" and "able to rest elbow on top of driver's door". Every factor identified in the diagram was included in the final design. 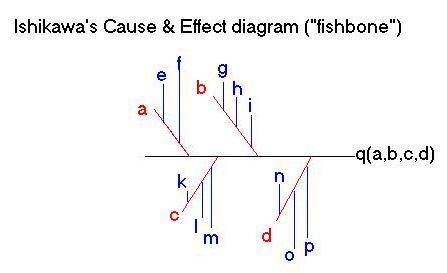 People sometimes call Ishikawa diagrams "fishbone diagrams" because of their fish-like appearance. Most Ishikawa diagrams have a box at the right hand side in which is written the effect that is to be examined. The main body of the diagram is a horizontal line from which stem the general causes, represented as "bones". These are drawn towards the left hand corners of the paper, and they are each labeled with the causes to be investigated. Off each of the large bones there may be smaller bones highlighting more specific aspects of a certain cause. When the most probable causes have been identified, they are written in the box along with the original effect.