The lacrimal glands are paired glands, one for each eye, that secrete the aqueous layer of the tear film.

Each lacrimal gland is divided into orbital and palpebral portions by the aponeurosis of the Levator palpebrae superioris muscle, the portions are continuous with each other.

The orbital portion contains fine interlobular ducts that unite to form 3 - 5 main excretory ducts, joining 5 - 7 ducts in the palpebral portion before the secreted fluid may enter on the surface of the eye.

The lacrimal gland is a tubuloacinar gland, it is made up of many lobules separated by connection tissue, each lobule contains many acini.

Each acini is a tubuloacinar unit, and they consist of a mass of cells with their apices pointed to a central lumen.

The lacrimal artery, derived from the ophthalmic artery supplies the lacrimal gland.

The ophthalmic artery and its branches. 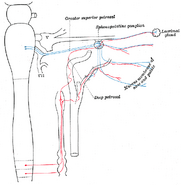 Sympathetic connections of the sphenopalatine and superior cervical ganglia.

The tarsal glands, etc., seen from the inner surface of the eyelids.