A lens is a device that causes light to either converge and concentrate or to diverge. It is usually formed from a piece of shaped glass or plastic.

Recent excavations at the Viking harbour town of Fröjel, Gotland in Sweden have revealed rock crystal lenses (the Visby lenses) produced at Fröjel in the 11th to 12th century via turning on pole-lathes that have an imaging quality comparable to that of 1950s aspheric lenses. The Viking lenses concentrate sunlight enough to ignite fires.

Widespread use of lenses did not occur until the use of reading stones in the 11th century and invention of spectacles, probably in Italy in the 1280s. Nicholas of Cusa is believed to have been the first to discover the benefits of concave lenses for the treatment of myopia in 1451.

Most lenses are spherical lenses: lenses whose surfaces have spherical curvature, that is, the front and back surfaces of the lens can each be imagined to be part of the surface of a sphere. Each surface can be convex (bulging outwards from the lens), concave (depressed into the lens), or planar (flat). The line joining the centres of the spheres making up the lens surfaces is called the axis of the lens; in almost all cases the lens axis passes through the physical centre of the lens.

Lenses are classified by the curvature of the two optical surfaces. A lens is biconvex (also called double convex, or just convex) if both surfaces are convex, likewise, a lens with two concave surfaces is biconcave (or just concave). If one of the surfaces is flat, the lens is plano-convex or plano-concave depending on the curvature of the other surface. A lens with one convex and one concave side is convex-concave, and in this case if both curvatures are equal it is a meniscus lens. (Sometimes, meniscus lens can refer to any lens of the convex-concave type).

If the lens is biconvex or plano-convex, a collimated or parallel beam of light travelling parallel to the lens axis and passing through the lens will be converged (or focused) to a spot on the axis, at a certain distance behind the lens (known as the focal length). In this case, the lens is called a positive or converging lens.

If the lens is convex-concave (a meniscus lens), whether it is converging or diverging depends on the relative curvatures of the two surfaces. If the curvatures are equal, then the beam is neither converged nor diverged.

The focal length of a lens in air can be calculated from the lensmaker's equation:[1]

is the focal length of the lens,

is the refractive index of the lens material,

is the radius of curvature of the lens surface closest to the light source,

is the radius of curvature of the lens surface farthest from the light source, and

is the thickness of the lens (the distance along the lens axis between the two surface vertices).

If d is small compared to R1 and R2, then the thin lens approximation can be made. For a lens in air, f is then given by

The focal length f is positive for converging lenses, negative for diverging lenses, and infinite for meniscus lenses. The value 1/f is known as the optical power of the lens, and so meniscus lenses are said to have zero power. Lens power is measured in dioptres, which are units equal to inverse meters (m−1).

Lenses have the same focal length when light travels from the back to the front as when light goes from the front to the back, although other properties of the lens, such as the aberrations are not necessarily the same in both directions.

If the distances from the object to the lens and from the lens to the image are S1 and S2 respectively, for a lens of negligible thickness, in air, the distances are related by the thin lens formula:

What this means is that, if an object is placed at a distance S1 along the axis in front of a positive lens of focal length f, a screen placed at a distance S2 behind the lens will have an image of the object projected onto it, as long as S1 > f. This is the principle behind photography. The image in this case is known as a real image.

Note that if S1 < f, S2 becomes negative, the image is apparently positioned on the same side of the lens as the object. Although this kind of image, known as a virtual image, cannot be projected on a screen, an observer looking through the lens will see the image in its apparent calculated position. A magnifying glass creates this kind of image.

The magnification of the lens is given by:

In the special case that S1 = ∞, then S2 = f and M = −f / ∞ = 0. This corresponds to a collimated beam being focused to a single spot at the focal point. The size of the image in this case is not actually zero, since diffraction effects place a lower limit on the size of the image (see Rayleigh criterion).

The formulas above may also be used for negative (diverging) lens by using a negative focal length (f), but for these lenses only virtual images can be formed.

For the case of lenses that are not thin, or for more complicated multi-lens optical systems, the same formulas can be used, but S1 and S2 are interpreted differently. If the system is in air or vacuum, S1 and S2 are measured from the front and rear principal planes of the system, respectively. Imaging in media with an index of refraction greater than 1 is more complicated, and is beyond the scope of this article.

One important use of lenses is as a prosthetic for the correction of visual impairments such as myopia, hyperopia, presbyopia, and astigmatism. See corrective lens, contact lens, eyeglasses.

Another use is in imaging systems such as a monocular, binoculars, telescope, spotting scope, telescopic gun sight, theodolite, microscope, and camera (photographic lens). A single convex lens mounted in a frame with a handle or stand is a magnifying glass.

Large convex lenses have been used for hundreds of years to light fires by concentrating sunlight. In this use they are commonly called burning-glasses. Such a lens does not need to be optically accurate to work satisfactorily. A modern variation of this is the use of a lens in combination with a photovoltaic cell to concentrate sunlight and improve the efficiency of the device.

Radio astronomy and radar systems often use dielectric lenses, commonly called a lens antenna to refract electromagnetic radiation into a collector antenna. The Square Kilometre Array radio telescope will employ such lenses to get a collection area nearly 30 times greater than what is currently the largest antenna ever built.

Lenses do not form perfect images, and there is always some degree of distortion or aberration introduced by the lens which causes the image to be an imperfect replica of the object. Careful design of the lens system for a particular application ensures that the aberration is minimized. There are several different types of aberration which can affect image quality.

Spherical aberration occurs because spherical surfaces are not the ideal shape with which to make a lens, but they are by far the simplest shape to which glass can be ground and polished and so are often used. Spherical aberration causes beams parallel to but away from the lens axis to be focused in a slightly different place than beams close to the axis. This manifests itself as a blurring of the image. Lenses in which closer-to-ideal, non-spherical surfaces are used are called aspheric lenses. These were formerly complex to make and often extremely expensive, although advances in technology have greatly reduced the cost of manufacture for these lenses. Spherical aberration can be minimised by careful choice of the curvature of the surfaces for a particular application: for instance, a plano-convex lens which is used to focus a collimated beam produces a sharper focal spot when used with the convex side towards the beam. 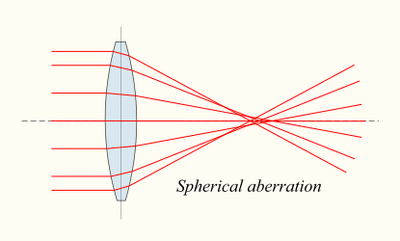 Another type of aberration is coma, which derives its name from the comet-like appearance of the aberrated image. Coma occurs when an object off the optical axis of the lens is imaged, where rays pass through the lens at an angle to the axis θ. Rays which pass through the centre of the lens of focal length f are focused at a point with distance f tan θ from the axis. Rays passing through the outer margins of the lens are focused at different points, either further from the axis (positive coma) or closer to the axis (negative coma). In general, a bundle of parallel rays passing through the lens at a fixed distance from the centre of the lens are focused to a ring-shaped image in the focal plane, known as a comatic circle. The sum of all these circles results in a V-shaped or comet-like flare. As with spherical aberration, coma can be minimised (and in some cases eliminated) by choosing the curvature of the two lens surfaces to match the application. Lenses in which both spherical aberration and coma are minimised are called bestform lenses. 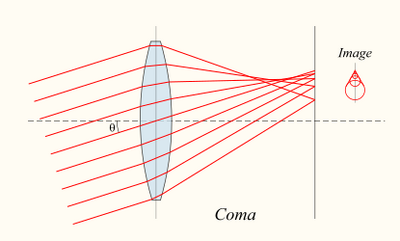 Chromatic aberration is caused by the dispersion of the lens material, the variation of its refractive index n with the wavelength of light. Since from the formulae above f is dependent on n, it follows that different wavelengths of light will be focused to different positions. Chromatic aberration of a lens is seen as fringes of colour around the image. It can be minimised by using an achromatic doublet (or achromat) in which two materials with differing dispersion are bonded together to form a single lens. This reduces the amount of chromatic aberration over a certain range of wavelengths, though it does not produce perfect correction. The use of achromats was an important step in the development of the optical microscope. An apochromat is a lens or lens system which has even better correction of chromatic aberration, combined with improved correction of spherical aberration. Apochromats are much more expensive than achromats. 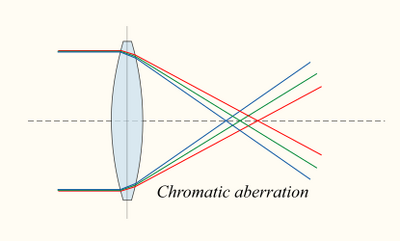 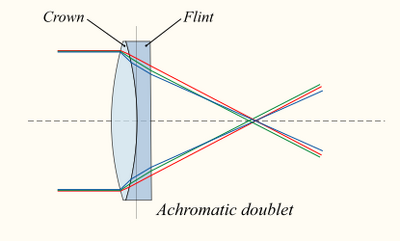 Other kinds of aberration include field curvature, barrel and pincushion distortion, and astigmatism.

Lenses may be combined to form more complex optical systems. The simplest case is when lenses are placed in contact: if the lenses of focal lengths f1 and f2 are "thin", the combined focal length f of the lenses can be calculated from:

Since 1/f is the power of a lens, it can be seen that the powers of thin lenses in contact are additive.

If two thin lenses are separated by some distance d, the distance from the second lens to the focal point of the combined lenses is called the back focal length (BFL). This is given by:

If the separation distance is equal to the sum of the focal lengths (d = f1+f2), the BFL is infinite. This corresponds to a pair of lenses that transform a parallel (collimated) beam into another collimated beam. This type of system is called afocal, since it produces no net convergence or divergence of the beam. Two lenses at this separation form the simplest type of optical telescope.

Although the system does not alter the divergence of a collimated beam, it does alter the width of the beam. The magnification of the telescope is given by:

which is the ratio of the input beam width to the output beam width. Note the sign convention; a telescope with two convex lenses (f1 > 0, f2 > 0) produce a negative magnification, indicating an inverted image. A convex plus a concave lens (f1 > 0 > f2) produces a positive magnification and the image is upright.