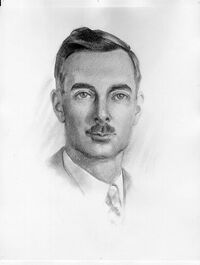 Leonard Carmichael (1898 — 1973) was an American educator and psychologist.

Born on November 9 1898 in Philadelphia, Pennsylvania, he received his B.S. from Tufts University in 1920 and his Ph.D. from Harvard University in 1924. He was a brother in the Theta Delta Chi fraternity during his time at Tufts and the largest philanthropic student group on campus bears his name.

He subsequently joined the faculty of Brown University. Carmichael served as the president of Tufts from 1938 to 1952. He served as the secretary of the Smithsonian Institution from 1953 to 1964. He become vice-president for research and exploration at National Geographic after leaving the Smithsonian.

Tufts University’s community service organization, the ([1]) Leonard Carmichael Society; Carmichael Hall, a dormitory on the Tufts campus; and the lunar crater Carmichael are all named in his honor.

Carmichael is sometimes mentioned in connection with the MKULTRA project (see[2]).

This article about a psychologist is a stub. You can help the Psychology Wiki by expanding it.