In statistics, linear regression is used for two things:

A linear regression model assumes, given a random sample

, a possibly imperfect relationship between

, which is a random variable too, is added to this assumed relationship to capture the influence of everything else on

Models which do not conform to this specification may be treated by nonlinear regression. A linear regression model need not be a linear function of the independent variable: linear in this context means that the conditional mean of

is linear in the parameters

. For example, the model

is linear in the parameters

, but it is not linear in

, a nonlinear function of

. An illustration of this model is shown in the example, below.

In general there are

parameters to be determined,

. In order to estimate the parameters it is often useful to use the matrix notation

and the matrix X the observed values of the regressors 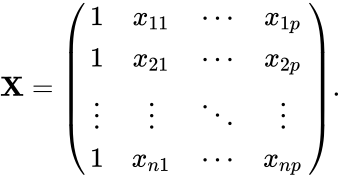 X includes, typically, a constant column, that is, a column which does not vary across observations, which is used to represent the intercept term

If there is any linear dependence among the columns of X, then the vector of parameters

cannot be estimated by least squares unless

is constrained, as, for example, by requiring the sum of some of its components to be 0. However, some linear combinations of the components of

may still be uniquely estimable in such cases. For example, the model

cannot be solved for

independently as the matrix of observations has the reduced rank 2. In this case the model can be rewritten as

and solved to give a value for the composite entity

Note that to only perform a least squares estimation of

that will produce estimators which are themselves random variables. Then it will be possible to study the distribution of the estimators and draw inferences.

is statistically independent of the predictor variables. This article adopts these assumptions unless otherwise stated. Note that all of these assumptions may be relaxed, depending on the nature of the true probabilistic model of the problem at hand. The issue of choosing which assumptions to relax, which functional form to adopt, and other choices related to the underlying probabilistic model are known as specification searches. In particular note that the assumption that the error terms are normally distributed is of no consequence unless the sample is very small because central limit theorems imply that, so long as the error terms have finite variance and are not too strongly correlated, the parameter estimates will be approximately normally distributed even when the underlying errors are not.

The conditional expected value of Yi given Xi is an affine function of Xi. Note that this expression follows from the assumption that the mean of

is zero conditional on Xi.

The first objective of regression analysis is to best-fit the data by estimating the parameters of the model. Of the different criteria that can be used to define what constitutes a best fit, the least squares criterion is a very powerful one. This estimate (or estimator, if we are in the context of a random sample), is given by

The estimates can be used to test various hypotheses.

the variance of the error term

(recall we assume that

). An unbiased estimate of

is the sum of square residuals. The relation between the estimate and the true value is:

has Chi-square distribution with n − p  − 1 degrees of freedom.

The solution to the normal equations can be written as [1]

, is computed as follows:

The residuals can be expressed as

is known as the hat matrix and has the useful property that it is idempotent. Using this property it can be shown that, if the errors are normally distributed, the residuals will follow a normal distribution with covariance matrix

. Studentized residuals are useful in testing for outliers.

The hat matrix is the matrix of the orthogonal projection onto the column space of the matrix X.

Given a value of the independent variable, xd, (where d = 1, 2, ..., n) the predicted response is calculated as

, the 100(1 − α)% mean response confidence interval for the prediction is given, using error propagation theory, by:

The 100(1 − α)% predicted response confidence intervals for the data are given by:

We consider here the case of the simplest regression model,

. In order to estimate

, we have a sample

of observations which are, here, not seen as random variables and denoted by lower case letters. As stated in the introduction, however, we might want to interpret the sample in terms of random variables in some other contexts than least squares estimation.

The idea of least squares estimation is to minimize the following unknown quantity, the sum of squared errors:

Taking the derivative of the preceding expression with respect to

This is a linear system of equations which can be solved using Cramer's rule:

The covariance matrix is

The mean response confidence interval is given by

The predicted response confidence interval is given by

is a reference to the Student's t-distribution.

In analysis of variance (ANOVA), the total sum of squares is split into two or more components.

The "total (corrected) sum of squares" is

is the average value of observed yi. (Here "corrected" means

has been subtracted from each y-value.) Equivalently

The regression sum of squares is

where u is an n-by-1 vector in which each element is 1. Note that

The total sum of squares SST is

Pearson's coefficient of regression, R 2 is then given as

If the errors are independent and normally distributed with expected value 0 and they all have the same variance, then under the null hypothesis that all of the elements in β = 0 except the constant, the statistic

follows an F-distribution with p and n − p − 1 degrees of freedom (n is the number of regressands and p + 1 is the number of unknown parameters β0, β1, ..., βp). If that statistic is too large, then one rejects the null hypothesis. How large is too large depends on the level of the test, which is the tolerated probability of type I error; see statistical significance.

Arises in the following situation: there are two statistical models:

Which one is better?

To illustrate the various goals of regression, we give an example. The following data set gives the average heights and weights for American women aged 30–39 (source: The World Almanac and Book of Facts, 1975).

A plot of weight against height (see below) shows that it cannot be modeled by a straight line, so a regression is performed by modeling the data by a parabola.

where the dependent variable

is weight and the independent variable

is formed by summing the products of column i and column j of X.

Element i of the right-hand side vector

is formed by summing the products of column i of X with the column of dependent variable values.

Thus, the normal equations are

The calculated values are given by

The observed and calculated data are plotted together and the residuals,

The confidence intervals are computed using:

Assume that the following two models have been proposed for the data in this example:

Which of these two is better?

Some of the model assumptions can be evaluated by calculating the residuals and plotting or otherwise analyzing them. The following plots can be constructed to test the validity of the assumptions:

There should not be any noticeable pattern to the data in all but the last plot.

Generalized least squares, which includes weighted least squares as a special case, can be used when the observational errors have unequal variance or serial correlation.

A host of alternative approaches to the computation of regression parameters are included in the category known as robust regression. One technique minimizes the mean absolute error, or some other function of the residuals, instead of mean squared error as in linear regression. Robust regression is much more computationally intensive than linear regression and is somewhat more difficult to implement as well. While least squares estimates are not very sensitive to breaking the normality of the errors assumption, this is not true when the variance or mean of the error distribution is not bounded, or when an analyst that can identify outliers is unavailable.

Among Stata users, Robust regression is frequently taken to mean linear regression with Huber-White standard error estimates due to the naming conventions for regression commands. This procedure relaxes the assumption of homoscedasticity for variance estimates only; the predictors are still ordinary least squares (OLS) estimates. This occasionally leads to confusion; Stata users sometimes believe that linear regression is a robust method when this option is used, although it is actually not robust in the sense of outlier-resistance.

The assumption that the error term in the linear model can be treated as uncorrelated with the independent variables will frequently be untenable, as omitted-variables bias, "reverse" causation, and errors-in-variables problems can generate such a correlation. Instrumental variable and other methods can be used in such cases.

Linear regression is widely used in biological, behavioral and social sciences to describe possible relationships between variables. It ranks as one of the most important tools used in these disciplines.

A trend line represents a trend, the long-term movement in time series data after other components have been accounted for. It tells whether a particular data set (say GDP, oil prices or stock prices) have increased or decreased over the period of time. A trend line could simply be drawn by eye through a set of data points, but more properly their position and slope is calculated using statistical techniques like linear regression. Trend lines typically are straight lines, although some variations use higher degree polynomials depending on the degree of curvature desired in the line.

Trend lines are sometimes used in business analytics to show changes in data over time. This has the advantage of being simple. Trend lines are often used to argue that a particular action or event (such as training, or an advertising campaign) caused observed changes at a point in time. This is a simple technique, and does not require a control group, experimental design, or a sophisticated analysis technique. However, it suffers from a lack of scientific validity in cases where other potential changes can affect the data.

As one example, early evidence relating tobacco smoking to mortality and morbidity came from studies employing regression. Researchers usually include several variables in their regression analysis in an effort to remove factors that might produce spurious correlations. For the cigarette smoking example, researchers might include socio-economic status in addition to smoking to ensure that any observed effect of smoking on mortality is not due to some effect of education or income. However, it is never possible to include all possible confounding variables in a study employing regression. For the smoking example, a hypothetical gene might increase mortality and also cause people to smoke more. For this reason, randomized controlled trials are often able to generate more compelling evidence of causal relationships than correlational analysis using linear regression. When controlled experiments are not feasible, variants of regression analysis such as instrumental variables and other methods may be used to attempt to estimate causal relationships from observational data.