Psychology Wiki
Register
Don't have an account?
Sign In
Advertisement
in: Pages with broken file links, Organs, Abdomen,
and 5 more

The liver is an organ in some animals, including vertebrates (and therefore humans). It plays a major role in metabolism and has a number of functions in the body including glycogen storage, plasma protein synthesis, and drug detoxification. This organ also is the largest gland in the human body and lies beneath the diaphragm in the upper right portion of the abdomen.[1] It produces bile, which is important in digestion. It performs and regulates a wide variety of high-volume biochemical reactions requiring specialized tissues. Medical terms related to the liver often start in hepato- or hepatic from the Greek word for liver, hepar.

The adult human liver normally weighs between 1.7 - 3.0 kilograms (3.7 - 6.5 pounds), and it is a soft, pinkish-brown "boomerang shaped" organ. It is the second largest organ (the largest organ being the skin) and the largest gland within the human body.

It is located on the right side of the upper abdomen body diaphragm. The liver lies on the right of the stomach and makes a kind of bed for the gallbladder (which stores bile).

The hepatic veins drain directly into the inferior vena cava.

The hepatic artery is generally a branch from the celiac trunk, although occasionally some or all of the blood can be from other branches such as the superior mesenteric artery.

Approximately 3/4 of the blood flow to the liver is from the portal venous system, and 1/4 is from the hepatic artery.

The bile produced in the liver is collected in bile canaliculi, which merge to form bile ducts.

The branchings of the bile ducts resemble those of a tree, and indeed the term "biliary tree" is commonly used in this setting.

The liver is among the few internal human organs capable of natural regeneration of lost tissue; as little as 25% of remaining liver can regenerate into a whole liver again.

Apart from a patch where it connects to the diaphragm, the liver is covered entirely by visceral peritoneum, a thin, double-layered membrane that reduces friction against other organs. The peritoneum folds back on itself to form the falciform ligament and the right and left triangular ligaments.

These "ligaments" are in no way related to the true anatomic ligaments in joints, and have essentially no functional importance, but they are easily recognizable surface landmarks.

Traditional gross anatomy divided the liver into four lobes based on surface features.

If the liver is flipped over, to look at it from behind (the visceral surface), there are two additional lobes between the right and left. These are the caudate lobe (the more superior), and below this the quadrate lobe.

From behind, the lobes are divided up by the ligamentum venosum and ligamentum teres (anything left of these is the left lobe), the transverse fissure (or porta hepatis) divides the caudate from the quadrate lobe, and the right sagittal fossa, which the inferior vena cava runs over, separates these two lobes from the right lobe.

The central area where the common bile duct, portal vein, and hepatic artery enter the liver is the hilum or "porta hepatis". The duct, vein, and artery divide into left and right branches, and the portions of the liver supplied by these branches constitute the functional left and right lobes.

The functional lobes are separated by a plane joining the gallbladder fossa to the inferior vena cava. This separates the liver into the true right and left lobes. The middle hepatic vein also demarcates the true right and left lobes. The right lobe is further divided into an anterior and posterior segment by the right hepatic vein. The left lobe is divided into the medial and lateral segments by the left hepatic vein. The fissure for the ligamentum teres (the ligamentum teres becomes the falciform ligament) also separates the medial and lateral segmants. The medial segment is what used to be called the quadrate lobe. In the widely used Couinaud or "French" system, the functional lobes are further divided into a total of eight subsegments based on a transverse plane through the bifurcation of the main portal vein. The caudate lobe is a separate structure which receives blood flow from both the right- and left-sided vascular branches.[2][3] The subsegments corresponding to the anatomical lobes are as follows:

Each number in the list corresponds to one in the table.

The various functions of the liver are carried out by the liver cells or hepatocytes.

Currently, there is no artificial organ or device capable of emulating all the functions of the liver. Some functions can be emulated by liver dialysis, an experimental treatment for liver failure.

Diseases of the liver

Many diseases of the liver are accompanied by jaundice caused by increased levels of bilirubin in the system. The bilirubin results from the breakup of the hemoglobin of dead red blood cells; normally, the liver removes bilirubin from the blood and excretes it through bile.

Human liver transplant was first performed by Thomas Starzl in USA and Roy Calne in England in 1963 and 1965 respectively.

Liver allografts for transplant usually come from non-living donors who have died from fatal brain injury. Living donor liver transplantation is a technique in which a portion of a living person's liver is removed and used to replace the entire liver of the recipient. This was first performed in 1989 for pediatric liver transplantation. Only 20% of an adult's liver (Couinaud segments 2 and 3) is needed to serve as a liver allograft for an infant or small child.

More recently, adult-to-adult liver transplantation has been done using the donor's right hepatic lobe which amounts to 60% of the liver. Due to the ability of the liver to regenerate, both the donor and recipient end up with normal liver function if all goes well. This procedure is more controversial as it entails performing a much larger operation on the donor, and indeed there have been at least 2 donor deaths out of the first several hundred cases. A recent publication has addressed the problem of donor mortality, and at least 14 cases have been found.[4] The risk of postoperative complications (and death) is far greater in right sided hepatectomy than left sided operations.

In the growing fetus, a major source of blood to the liver is the umbilical vein which supplies nutrients to the growing fetus. The umbilical vein enters the abdomen at the umbilicus, and passes upward along the free margin of the falciform ligament of the liver to the inferior surface of the liver. There it joins with the left branch of the portal vein. The ductus venosus carries blood from the left portal vein to the left hepatic vein and then to the inferior vena cava, allowing placental blood to bypass the liver.

In the fetus, the liver develops throughout normal gestation, and does not perform the normal filtration of the infant liver. The liver does not perform digestive processes because the fetus does not consume meals directly, but receives nourishment from the mother via the placenta. The fetal liver releases some blood stem cells that migrate to the fetal thymus, so initially the lymphocytes, called T-cells, are created from fetal liver stem cells. Once the fetus is delivered, the formation of blood stem cells in infants shifts to the red bone marrow.

Both animal and fish livers are rich in iron and Vitamin A and cod liver oil is commonly used as a supplement. Very high doses of Vitamin A can be toxic; Antarctic explorers Douglas Mawson and Xavier Mertz were both poisoned, the latter fatally, from eating husky liver. In the US, the USDA specifies 3000 μg per day as a tolerable upper limit, which amounts to about 50 g of raw pork liver or, as reported in a non scientific source, 3 g of polar-bear liver.[5] However, acute vitamin A poisoning is not likely to result from liver consumption, since it is present in a less toxic form than in many dietary supplements.[6]

In Greek mythology, Prometheus was punished by the gods for revealing fire to humans by being chained to a rock where a vulture (or an eagle, Ethon) would peck out his liver, which would regenerate overnight. Curiously, the liver is the only human internal organ that actually can regenerate itself to a significant extent, a characteristic which may have already been known to the Greeks, possibly due to survived injuries in battle.

The Talmud (tractate Berakhot 61b) refers to the liver as the seat of anger, with the gallbladder counteracting this.

In Arabic and Persian language, the liver is used in figurative speech to refer to courage and strong feelings, or "their best," e.g. "This Mecca has thrown to you the pieces of its liver!" [7]

The legend of Liver-Eating Johnson says that he would cut out and eat the liver of each man killed.

In the motion picture The Message, Hind bint Utbah is implied or portrayed eating the liver of Hamza ibn ‘Abd al-Muttalib during the Battle of Uhud.

The following are standard medical textbooks:

These are for the lay reader or patient: 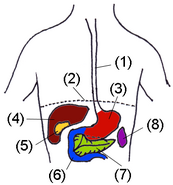 The liver and the veins in connection with it, of a human embryo, twenty-four or twenty-five days old, as seen from the ventral surface.

Transverse section through the middle of the first lumbar vertebra, showing the relations of the pancreas. 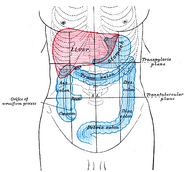 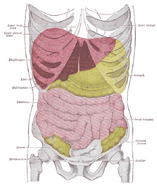 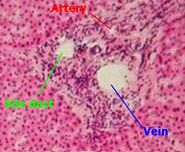