A lymph node (Template:Pron-en) is a small circular ball shape organ of the immune system, distributed widely throughout the body and linked by lymphatic vessels. Lymph nodes are garrisons of B, T, and other immune cells. Lymph nodes are found all through the body, and act as filters or traps for foreign particles. They contain white blood cells that use oxygen to process. Thus they are important in the proper functioning of the immune system.

Lymph nodes also have clinical significance. They become inflamed or enlarged in various conditions, which may range from trivial, such as a throat infection, to life-threatening such as cancers. In the latter, the condition of lymph nodes is so significant that it is used for cancer staging, which decides the treatment to be employed, and for determining the prognosis.

Lymph nodes can also be diagnosed by biopsy whenever they are inflamed. Certain diseases affect lymph nodes with characteristic consistency and location.

Pathogens, or germs, can set up infections anywhere in the body. However, lymphocytes, a type of white blood cell, will meet the antigens, or proteins, in the peripheral lymphoid organs, which includes lymph nodes. The antigens are displayed by specialized cells in the lymph nodes. Naive lymphocytes (meaning the cells have not encountered an antigen yet) enter the node from the bloodstream, through specialized capillary venules. After the lymphocytes specialize they will exit the lymph node through the efferent lymphatic vessel with the rest of the lymph. The lymphocytes continuously recirculate the peripheral lymphoid organs and the state of the lymph nodes depends on infection. During an infection, the lymph nodes can expand due to intense B-cell proliferation in the germinal centers, a condition commonly referred to as "swollen glands".

Thin reticular fibers, elastin and reticular fibers form a supporting meshwork called reticular network (RN) inside the node, within which the white blood cells (WBCs), most prominently, lymphocytes are tightly packed as follicles in the cortex. Elsewhere, there are only occasional WBCs. The RN provides not just the structural support, but also provide surface for adhesion of the dendritic cells, macrophages and lymphocytes. It allows for exchange of material with blood through the high endothelial venules and provides the growth and regulatory factors necessary for activation and maturation of immune cells.[2]

The number and composition of follicles can change especially when challenged by an antigen, when they develop a germinal center.[1]

A lymph sinus is a channel within the lymph node lined by the endothelial cells along with fibroblastic reticular cells and allows for smooth flow of lymph through them. Thus, subcapsular sinus is a sinus immediately deep to the capsule, and its endothelium is continuous with that of the afferent lymph vessel. It is also continuous with similar sinuses flanking the trabeculae and within the cortex (cortical sinuses). The cortical sinuses and that flanking the trabeculae drain into the medullary sinuses, from where the lymph flows into the efferent lymph vessel.[1]

Multiple afferent lymph vessels that branch and network extensively within the capsule bring lymph into the lymph node. This lymph enters the subcapsular sinus. The innermost lining of the afferent lymph vessels is continuous with the cells lining the lymph sinuses.[1] The lymph gets slowly filtered through the substance of the lymph node and ultimately reaches the medulla. In its course it encounters the lymphocytes and may lead to their activation as a part of adaptive immune response.

In the cortex, the subcapsular sinus drains to cortical sinuses.

The outer cortex consists mainly of the B cells arranged as follicles, which may develop a germinal center when challenged with an antigen, and the deeper cortex mainly consisting of the T cells. There is a zone known as the subcortical zone where T-cells (or cells that are mainly red) mainly interact with dendritic cells, and where the reticular network is dense.[3]

There are two named structures in the medulla:

Human lymph nodes are bean-shaped and range in size from a few millimeters to about 1–2 cm in their normal state.[1] They may become enlarged due to a tumor or infection. Lymphocytes, also known as white blood cells are located within honeycomb structures of the lymph nodes. Lymph nodes are enlarged when the body is infected, primarily because there is an elevated rate of trafficking of lymphocytes into the node from the blood, exceeding the rate of outflow from the node, and secondarily as a result of the activation and proliferation of antigen-specific T and B cells (clonal expansion). In some cases they may feel enlarged because of a previous infection; although one may be healthy, one may still feel them residually enlarged.

Lymph circulates to the lymph node via afferent lymphatic vessels and drains into the node just beneath the capsule in a space called the subcapsular sinus. The subcapsular sinus drains into trabecular sinuses and finally into medullary sinuses. The sinus space is criss-crossed by the pseudopods of macrophages which act to trap foreign particles and filter the lymph. The medullary sinuses converge at the hilum and lymph then leaves the lymph node via the efferent lymphatic vessel towards either a more central lymph node or ultimately for drainage into a central venous subclavian blood vessel, most via the postcapillary venules, and cross its wall by the process of diapedesis.

When a lymphocyte recognizes an antigen, B cells become activated and migrate to germinal centers (by definition, a "secondary nodule" has a germinal center, while a "primary nodule" does not). When antibody-producing plasma cells are formed, they migrate to the medullary cords. Stimulation of the lymphocytes by antigens can accelerate the migration process to about 10 times normal, resulting in characteristic swelling of the lymph nodes.

The spleen and tonsils are large lymphoid organs that serve similar functions to lymph nodes, though the spleen filters blood cells rather than lymph.

Humans have approximately 500-600 lymph nodes distributed throughout the body, with clusters found in the underarms, groin, neck, chest, and abdomen.

Lymph nodes of the head and neck

Retropharyngeal: Drains lymph from the soft palate and the 3rd molars.

Lymph nodes of the thorax

The mediastinal lymph nodes along the esophagus are in tight connection with the abdominal lymph nodes along the esophagus and the stomach. That fact facilitates spreading of tumors cells through these lymphatics in cases of cancers of the stomach and particularly of the esophagus. Through the mediastinum, the main lymphatic drainage from the abdominal organs goes via the thoracic duct (ductus thoracicus), which drains majority of the lymph from the abdomen to the above mentioned left venous angle.

Lymph nodes of the arm

These drain the whole of the arm, and are divided into two groups, superficial and deep. The superficial nodes are supplied by lymphatics which are present throughout the arm, but are particularly rich on the palm and flexor aspects of the digits. 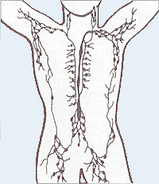