Meissner's corpuscles (or tactile corpuscles) are a type of mechanoreceptor[1]. They are a type of nerve ending in the skin that is responsible for sensitivity to light touch. In particular, they have highest sensitivity (lowest threshold) when sensing vibrations lower than 50 Hertz. They are rapidly adaptive receptors.

They are distributed on various areas of the skin, but concentrated in areas especially sensitive to light touch, such as the fingers and lips.[2][3] Sources differ as to whether they are present in the male prepuce (foreskin): while Winkelmann (1956) reported that they were not present in the prepuce of newborn males,[4] Taylor (1996) noted their presence,[5] and (1999) reported "Most of the encapsulated receptors of the prepuce are Meissner corpuscles, as they contact the epithelial basement membrane."[6] Winkelmann discussed the conflicting literature on the subject, noting that Dogiel, Ohmori, and Bazett et al. reported the presence of Meissner's corpuscles, and that their descriptions of the structures concerned did not agree.[4]

They are primarily located just beneath the epidermis within the dermal papillae.[7]

Meissner's corpuscles are encapsulated unmyelinated nerve endings, which consist of flattened supportive cells arranged as horizontal lamellae surrounded by a connective tissue capsule. The corpuscle is between 30-140 μm in length and 40-60 μm in diameter.

A single nerve fiber meanders between the lamellae and throughout the corpuscle.

The number of Meissner corpuscles per square millimeter of human skin on the fingertips drops fourfold between the ages of 12 and 50. The rate at which they are lost correlates well with the age-related loss in touch sensitivity for small probes (Thornbury and Mistretta, 1981).

Any physical deformation in the corpuscle will cause an action potential in the nerve. Since they are rapidly adapting or phasic, the action potentials generated quickly decrease and eventually cease. (This is the reason one stops "feeling" one's clothes.)

If the stimulus is removed, the corpuscle regains its shape and while doing so (ie: while physically reforming) causes another volley of action potentials to be generated.

Because of their superficial location in the dermis, these corpuscles are particularly sensitive to touch and vibrations, but for the same reasons, they are limited in their detection because they can only signal that something is touching the skin.

Comparison with other receptors

Feelings of deep pressure (from a poke, for instance) are generated from Pacinian corpuscles (the only other type of phasic tactile mechanoreceptor), which are located deeper in the dermis, and some free nerve endings.

Also, Meissner's corpuscles do not detect pain; this is signalled exclusively by free nerve endings.

Meissner's corpuscles were discovered by the anatomist Georg Meissner (1829-1905). 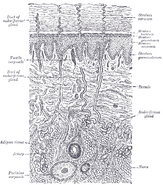