Microtubules are one of the components of the cytoskeleton. They have diameter of ~ 24 nm and length varying from several micrometers to possibly millimeters in axons of nerve cells. Microtubules serve as structural components within cells and are involved in many cellular processes including mitosis, cytokinesis, and vesicular transport.

Another important feature of microtubule structure is polarity. Tubulin polymerizes end to end with the α subunit of one tubulin dimer contacting the β subunit of the next. Therefore, in a protofilament, one end will have the α subunit exposed while the other end will have the β subunit exposed. These ends are designated (−) and (+) respectively. The protofilaments bundle parallel to one another, so in a microtubule, there is one end, the (+) end, with only β subunits exposed while the other end, the (−) end, only has α subunits exposed.

Microtubules are nucleated and organized by the microtubule organizing centers (MTOCs), such as centrosomes and basal bodies. They are part of a structural network (the cytoskeleton) within the cell's cytoplasm, but, in addition to structural support, microtubules take part in many other processes, as well. They are capable of growing and shrinking in order to generate force, and there are also motor proteins that move along the microtubule. A notable structure involving microtubules is the mitotic spindle used by eukaryotic cells to segregate their chromosomes correctly during cell division. Microtubules are also part of the cilia and flagella of eukaryotic cells (prokaryote flagella are entirely different). Microtubules also move organelles and cell structures to new locations.

Polymerization of microtubules is nucleated in a microtubule organizing center. Contained within the MTOC is another type of tubulin, γ-tubulin, which is distinct from the α and β subunits which compose the microtubules themselves. The γ-tubulin combines with several other associated proteins to form a circular structure known as the "γ-tubulin ring complex." This complex acts as a scaffold for α/β tubulin dimers to begin polymerization; it acts as a cap of the (−) end while microtubule growth continues away from the MTOC in the (+) direction. 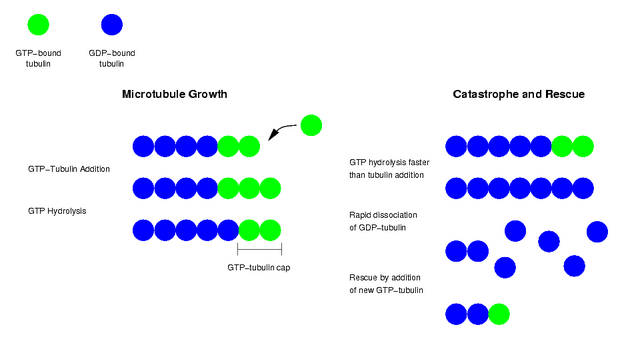 In vivo microtubule dynamics vary considerably. Assembly, disassembly and catastrophe rates depend on which microtubule-associated proteins (MAPs) are present.

Microtubule dynamics can also be altered by drugs. For example, the taxane drug class (e.g. paclitaxel or docetaxel), used in the treatment of cancer, blocks dynamic instability by stabilizing GDP-bound tubulin in the microtubule. Thus, even when hydrolysis of GTP reaches the tip of the microtubule, there is no depolymerization and the microtubule does not shrink back. Nocodazole and Colchicine have the opposite effect, blocking the polymerization of tubulin into microtubules.

The neutrality of this section is disputed. Please view the article's talk page section.

Microtubules have been ascribed a key role in explaining the features of consciousness in a controversial theory developed by Roger Penrose and Stuart Hameroff, known as Orch-OR (orchestrated objective reduction). This theory is regarded with considerable scepticism, and has recently been subjected to a quantitative critique by Max Tegmark, which argued that the observed time scale of neuron firing and excitations in microtubules is slower than the timescales predicted by the theory by a factor of at least 10,000,000,000.

In addition to the problems of time scale and size, Orch-OR relies on the ability of tubulin to exist in one of two equally likely states. While tubulin, does have two different conformations (a GDP-bound curved conformation and a GTP-bound straight conformation), the GDP-bound state is the only state that is found within the interior of a microtubule. GTP-bound tubulin is only present in the cell at the very end of a polymerizing microtubule and free in the cytoplasm as isolated tubulin dimers.