A muscle contraction (also known as a muscle twitch or simply twitch) occurs when a muscle cell (called a muscle fiber) lengthens or shortens. Locomotion in most higher animals is possible only through the repeated contraction of many muscles at the correct times. Contraction is controlled by the central nervous system comprised of brain and spinal cord. The brain controls voluntary muscle contractions, while the spine controls involuntary reflexes.

For voluntary muscles, contraction occurs as a result of conscious effort originating in the brain. The brain sends signals, in the form of action potentials, through the nervous system to the motor neuron that innervates the muscle fiber. In the case of some reflexes, the signal to contract can originate in the spinal cord through a feedback loop with the grey matter. Involuntary muscles such as the heart or smooth muscles in the gut and vascular system contract as a result of non-conscious brain activity or stimuli endogenous to the muscle itself. Other actions such as locomotion, breathing, chewing have a reflex aspect to them; the brain will start the contractions, but continuation of the movements can become reflexive.

For skeletal muscles, the force exerted by the muscle is controlled by varying the frequency at which action potentials are sent to muscle fibers. Action potentials do not arrive at muscles synchronously, and during a contraction some fraction of the fibers in the muscle will be firing at any given time. Typically when a human is exerting a muscle as hard as they are consciously able, roughly one-third of the fibers in that muscle will be firing at once, but various physiological and psychological factors (including Golgi tendon organs and Renshaw cells) can affect that. This 'low' level of contraction is a protective mechanism to prevent avulsion of the tendon - the force generated by a 100% contraction of all fibres is sufficient to damage the body. 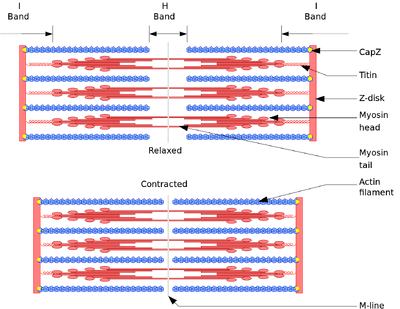 Skeletal muscles contract according to the sliding-filament model:

Voluntary muscular contractions can be classified several ways; one of which categorizes them as either eccentric or concentric. In the case of eccentric contraction, the force generated is insufficient to overcome the resistance placed on the muscle and the muscle fibers lengthen as they contract. In the case of concentric contraction, the force generated is sufficient to overcome the resistance, and the muscle shortens as it contracts.

The interaction of sliding actin and myosin filaments is similar in smooth muscle. There are differences in the proteins involved in contraction in vertebrate smooth muscle compared to cardiac and skeletal muscle. Smooth muscle does not contain troponin, but does contain the thin filament protein tropomyosin and other notable proteins-caldesmon and calponin. Contractions are initiated by the calcium activated phosphorylation of myosin rather than calcium binding to troponin. Contractions in vertebrate smooth muscle are initiated by agents that increase intracellular calcium. This is a process of depolarizing the sarcolemma and extracellular calcium entering through L type calcium channels, and intracellular calcium release predominately from the sarcoplasmic reticulum. Calcium release from the sarcoplasmic reticulum is from Ryanodine receptor channels (calcium sparks) by a redox process and Inositol triphosphate receptor channels by the second messenger inositol triphosphate. The intracellular calcium binds with calmodulin which then binds and activates myosin-light chain kinase. The calcium-calmodulin-myosin light chain kinase complex phosphorylates myosin, specifically on the 20 kilodalton (kd) myosin light chains on amino acid residue-serine 19 to initiate contraction and activate the myosin ATPase. The phosphorylation of caldesmon and calponin by various kinases is suspected to play a role in smooth muscle contraction.

Phosphorylation of the 20 kd myosin light chains correlates well with the shortening velocity of smooth muscle. During this period there is a rapid burst of energy utilization as measured by oxygen consumption. Within a few minutes of initiation the calcium level markedly decrease, the 20 kd myosin light chains phosphorylation decreases, and energy utilization decreases, however there is a sustained maintenance of force in tonic smooth muscle. During contraction of muscle, rapidly cycling crossbridges form between activated actin and phosphorylated myosin generating force. The maintenance of force is hypothesized to result from dephosphorylated "latch-bridges" that slowly cycle and maintain force. A number of kinases such as ROCK, Zip kinase, and Protein Kinase C are believed to participate in the sustained phase of contraction, and calcium flux may be significant.

In invertebrate smooth muscle, contraction is initiated with calcium directly binding to myosin and then rapidly cycling cross-bridges generating force. Similar to vertebrate tonic smooth muscle there is a low calcium and low energy utilization catch phase. This sustained phase or catch phase has been attributed to a catch protein that is similar to myosin light chain kinase and titin called twitchin.

A concentric contraction is a type of muscle contraction in which the muscles generates enough force to overcome the resistance to joint movement so it shortens as it contracts.

During a concentric contraction, a muscle is stimulated to contract according to the sliding filament mechanism. This occurs throughout the length of the muscle, generating force at the musculo-tendinous junction, causing the muscle to shorten and changing the angle of the joint. In relation to the elbow and bicep, the contraction of the bicep would cause the hand to move from close to the leg, to close to the shoulder (a bicep curl). A concentric contraction of the tricep would change the angle of the joint in the opposite direction.

Because the contraction works in the opposite direction the muscles are generally supposed to move (i.e. muscles can only shorten, never lengthen), muscles undergoing heavy eccentric loading suffer greater damage when overloaded (such as during muscle building or strength training exercise) as compared to concentric loading. When eccentric contractions are used in strength training and/or bodybuilding they are normally called "negatives." Normally muscle fibers move across each other pulling the Z-lines together, closing the joint. During an eccentric contraction, the myosin heads try to pull (controlling the movement), but the opening of the joint reacts to pull back, 'breaking' some of the myosin heads. This also occurs during regular contractions, but as a result of more of the individual heads being pulled in the wrong direction, more are broken. As a result, exercise featuring a heavy eccentric load can actually support a greater weight (muscles are approximately 10% stronger during eccentric contractions than during concentric contractions) and also results in greater muscular damage and delayed onset muscle soreness one to two days after training. Exercise that incorporates both eccentric and concentric muscular contractions (i.e. involving a strong contraction and a controlled lowering of the weight) can produce greater gains in strength and toughness than concentric contractions alone.