The musculocutaneous nerve arises from the lateral cord of the brachial plexus, opposite the lower border of the Pectoralis minor, its fibers being derived from the fifth, sixth, and seventh cervical nerves.

In its course through the arm it innervates the Coracobrachialis, Biceps brachii, and the greater part of the Brachialis.

It may adhere for some distance to the median and then pass outward, beneath the Biceps brachii, instead of through the Coracobrachialis.

The nerve may pass under the Coracobrachialis or through the Biceps brachii.

Occasionally it gives a filament to the Pronator teres, and it supplies the dorsal surface of the thumb when the superficial branch of the radial nerve is absent.

Although rare, the musculocutaneous n. can be affected through compression due to hypertrophy or entrapment between the biceps aponeurosis & brachialis fascia or it may be injured through stretch as occurs in dislocations & sometimes in surgery.

A discrete sensory disturbance is present on the radial side of the forearm.

The nerve is usually involved in an upper brachial plexus palsy

Heavy backpacks can cause damage to the upper trunk of the brachial plexus – dysfunction can be severe & prolonged with similar injury as occurs with Erb's palsy from breech deliveries. Early detection is important – the combination of time, avoidance of wearing a backpack, and strengthening of the shoulder muscles will probably be effective.

Distal to the coracobrachialis, the MC cause appears to be weight lifting – either through compression due to hypertrophy or entrapment between the biceps & brachialis, the nerve may lead to a painless loss of muscle strength in flexion & supination of the forearm. Initial treatment should include avoidance of biceps curls or other biceps exercises.

Initial treatment should include avoidance of biceps curls or other biceps exercises.

Cross-section through the middle of upper arm.

The veins of the right axilla, viewed from in front. 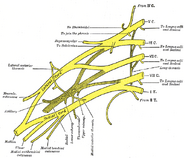 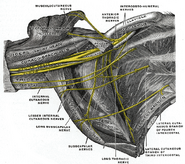 The right brachial plexus (infraclavicular portion) in the axillary fossa; viewed from below and in front.

Diagram of segmental distribution of the cutaneous nerves of the right upper extremity. Anterior view.