A nest is place of refuge built to hold an animal's eggs and/or provide a place to raise their offspring. They are usually made of organic material such as twigs, grass, and leaves; or may simply be a depression in the ground, or a hole in a tree, rock or building. Sometimes available human made materials such as string, plastic, cloth, hair, paper, etc. may be used as well.

Generally each species has a distinctive style of nest. Nests can be found in many different habitats.

Nests are built primarily by birds, but also by mammals, fish, insects and reptiles.

They may have some or all of the following zones: attachment; outer decorative layer; structural layer; lining.

Some birds will build nests in trees, some (such as vultures, eagles, and many seabirds like Kittiwakes) will build them on rocky ledges, and others nest on the ground or in burrows.

Most species of birds build some sort of nest, though some lay their eggs directly onto rock ledges or bare soil without first modifying the area. Nest types vary from the very simple scrape, which is merely a shallow depression in soil or vegetation, to the elaborately woven pendant or sphere; some bird species use cavities in trees or dig burrows into the ground.

Single egg in the nest of an American Robin

The inside of a bird's nest

Mud nests made by swallows

A nest in a lamp

A bird building a basket nest 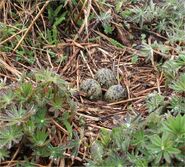 Richard's Pipit Anthus richardi chicks in a nest on the ground