There are six Orbital Muscles; Four of the muscles control the movement of the eye going up and down and side to side. Two of the muscles control the eye to move while the head moves. For instance look in the mirror sometime, you can see your eyes looking right at it. Then stare at the mirror while moving your head side to side. You can see your eyes move but you still are looking at the mirror. That is what the other two muscles do.

The motor apparatus, precisely and rapidly, controls eye movement for exact alignment with the fovea, since this is the area that deals with sharp vision. This swift and accurate motion is evident in reading. When keeping the gaze on a small object, like a golf ball, the eyes must compensate for the small movements of the head to keep the object on the fovea. The eyes can be controlled by voluntary means, as one can deliberately change focus. However, most eye movement is done without awareness. This is evident when viewing moving objects or head or body movement. Studying the movements of the eyes depend on reflexes brought on by factors in the environment or the individual, keeping in mind the voluntary control.

See also: Table of muscles of the human body#Extraocular

The nuclei or bodies of these nerves are found in the brain stem. The nuclei of the abducens and oculomotor nerves are connected. This is important in coordinating motion of the lateral rectus in one eye and the medial action on the other. Two antagonistic muscles, like the lateral and medial recti. Contraction of one leads to inhibition of the other. Muscles shows small degrees of activity even when resting, keeping the muscles taut. This "tonic" activity is brought on by discharges of the motor nerve to the muscle.

Note that intorsion and extorsion are not included in the following table; their actions are accounted for via summation of other actions.

In an eye examination, the inability of the patient to move the eye in the specified direction can indicate a problem with the associated muscle, and the nerve associated with that muscle.

Coordination of Movement Between Both Eyes

Intermediate directions are controlled by the simultaneous actions of multiple muscles. When one shifts the gaze horizontally, one eye will move laterally (toward the side) and the other will move medially (toward the midline). This may be neurally coordinated by the central nervous system, to move together and almost involuntarily. This is a key factor in the study of squint, namely, the inability of the eyes to be directed to one point.

There are two main kinds of movement: conjugate movement (the eyes move in the same direction) and disjunctive (opposite directions). The former is typical when shifting gaze right or left, the latter is convergence of the two eyes on a near object. Disjunction can be performed voluntarily, but is usually triggered by the nearness of the target object. A "see-saw" movement, namely, one eye looks up and the other down, is possible, but not voluntarily; this effect is brought on by putting a prism in front of one eye, and the relevant image is apparently displaced. However, to avoid double vision from noncorrsponding points from, the eye with the prism must move up or down, following the image passing through the prism. Likewise torsion (rolling) on the anteroposterior axis (from the front to the back) can occur naturally, as when one tips his head to one shoulder, the torsion, in the opposite direction, keeps the image vertical.

The muscles show little inertia, so a shutdown of one muscle is not due to checking of the antagonist, so the motion is not ballistic.

Five with paths from annulus of zinn

Five of the extraocular muscles have their origin in the back of the orbit in a fibrous ring called the annulus of Zinn.

Four of these then course forward through the orbit and insert onto the globe on its anterior half (i.e., in front of the eye's equator). These muscles are named after their straight paths, and are called the four rectus muscles, or four recti.

(Note that lateral and medial are relative to the subject, with lateral toward the side and medial toward the midline, thus the medial rectus is the muscle closest to the nose).

A good mnemonic to remember which muscles are innervated by what nerve is to paraphrase it as a molecular equation: LR6SO4R3.[4] or (LR6SO4)3 i.e. "LR 6 SO 4 Whole 3."

Another way to remember which nerves innervate which muscles is to understand the meaning behind all of the Latin words.

Figure showing the mode of innervation of the Recti medialis and lateralis of the eye. 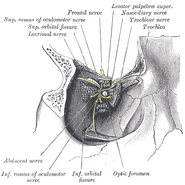