Psychology Wiki
Register
Don't have an account?
Sign In
Advertisement
in: Articles with unsourced statements, Cleanup from November 2008, All pages needing cleanup,
and 2 more

View source
watch 01:54
Obi-Wan Finale - The Loop
Do you like this video?
Play Sound

The optic nerve, also called cranial nerve II, is the nerve that transmits visual information from the retina to the brain.

The optic nerve is composed of retinal ganglion cell axons and Portort cells. It leaves the orbit (eye) via the optic canal, running postero-medially towards the optic chiasm where there is a partial decussation (crossing) of fibers from the nasal visual fields of both eyes. Most of the axons of the optic nerve terminate in the lateral geniculate nucleus from where information is relayed to the visual cortex. Its diameter increases from about 1.6 mm within the eye, to 3.5 mm in the orbit to 4.5 mm within the cranial space. The optic nerve component lengths are 1 mm in the globe,24 mm in the orbit, 9 mm in the optic canal and 16 mm in the cranial space before joining the optic chiasm. There, partial decussation occurs and about 53% of the fibers cross to form the optic tracts. Most of these fibres terminate in the lateral geniculate body.

From the lateral geniculate body, fibers of the optic radiation pass to the visual cortex in the occipital lobe of the brain. More specifically, fibers carrying information from the contralateral superior visual field traverse Meyer's loop to terminate in the lingual gyrus below the calcarine fissure in the occipital lobe, and fibers carrying information from the contralateral inferior visual field terminate more superiorly.

Physiology (and an unexplained anomaly)

The eye's blind spot is a result of the absence of retina where the optic nerve leaves the eye. This is because there are no photoreceptors in this area.

The optic nerve contains 1.2 million nerve fibers. This number is low compared to the roughly 100 million photoreceptors in the retina,[1] and implies that substantial pre-processing takes place in the retina before the signals are sent to the brain through the optic nerve.[How to reference and link to summary or text]     There is however an alternative explanation which might conceivably account for this apparent large discrepancy. In commercial communication-channels, there are ways of vastly increasing the signal-capacity (e.g. by using multiple-or-changed modes or frequencies), and there is a case for believing that may be occurring here. See the Appendix, below.   In any case, this is an anomaly — and that arguably calls for investigation along any promising lines-of-enquiry.

Damage to the optic nerve typically causes permanent and potentially severe loss of vision, as well as an abnormal pupillary reflex, which is diagnostically important. The type of visual field loss will depend on which portions of the optic nerve were damaged. Generally speaking:

Injury to the optic nerve can be the result of congenital or inheritable problems like Leber's Hereditary Optic Neuropathy, glaucoma, trauma, toxicity, inflammation, ischemia, infection (very rarely), or compression from tumors or aneurysms. By far, the three most common injuries to the optic nerve are from glaucoma, optic neuritis (especially in those younger than 50 years of age) and anterior ischemic optic neuropathy (usually in those older than 50).

Optic neuritis is inflammation of the optic nerve. It is associated with a number of diseases, most notably multiple sclerosis.

Anterior Ischemic Optic Neuropathy is a particular type of infarct that affects patients with an anatomical predisposition and cardiovascular risk factors.

The International Foundation for Optic Nerve Diseases IFOND sponsors research and information on a variety of optic nerve disorders and may provide general direction.

The ophthalmic artery and its branches. (optic nerve is yellow) 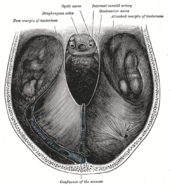 Tentorium cerebelli from above. 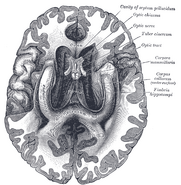 The fornix and corpus callosum from below.

Nerves of the orbit, and the ciliary ganglion. Side view.

Appendix: A possible explanation for the "inadequate" signal capacity of optic nerves

(See the anomaly mentioned above in the "Physiology" section).

Myelinated nerve fibres are very like miniature versions of coaxial cables such as those used for TV aerials or for underwater telegraph-signalling in the 1800s. In fact, neurophysiologists still use Lord Kelvin's cable formula of the 1860s in calculations concerning saltatory conduction of myelinated nerve-fibres. Thus it seems appropriate to invoke any other theoretical peculiarities exhibited by coaxial cables.

Kelvin's formula for trans-Atlantic cables was a simplification based on the apparently-reasonable assumption that frequencies would be fairly low (based on manual Morse-signalling) so that any inductance ("L") would be negligible. However if we do use much higher frequencies (what we would now call "Radio Frequencies"), then "L" becomes very important, thus allowing new transmission modes (effectively fibre-optics) [2][3] — and incidentally leading to the invention of radio as a by-product, as demonstrated by Heinrich Hertz in 1888.

Thus trans-Atlantic cables were capable of operating in two rather-different modes (and the new method was much more efficient, with a much greater "bandwidth"). However it took a prolonged effort by Oliver Heaviside to get this view accepted despite vigorous opposition from the then senior electrician of the British Post Office, Sir William Preece.[4]

For high-frequency transmission in coaxial cables, the wave-length needs to be roughly comparable to the cable diameter. For myelinated axons (with diameters mostly in the 1-to-10 micrometre range) this suggests that the relevant radiation will be Infra-Red rather than the familiar Radio-Frequency. In any case, this would offer ample scope for broadband facilities — though we cannot yet tell whether nature has chosen to take advantage of this opportunity. Moreover, this IR would seem to be compatible with the quantum jumps which might be expected from any biochemical "switching"-or-"commands".     Clearly if this extra mode is available, then there will be less need for pre-processing in the retina, though it is well known that some important pre-processing does take place there, and that at least some of the communication is via action-potentials.     In any case, it is most unlikely that any visible-light signals would be transmitted this way, if only because their wavelengths would be too short.

Other indirect evidence for this alternative signal-mode

There is no systematic direct evidence for this notion; but it has prompted promising unexpected solutions in other related fields, which may be seen as indicative: