Psychology Wiki
Register
Don't have an account?
Sign In
Advertisement
in: Pages with broken file links, Muscles of the head and neck, Sphincters

In human anatomy, the orbicularis oris muscle is the sphincter muscle around the mouth.

The Orbicularis oris is not a simple sphincter muscle like the Orbicularis oculi; it consists of numerous strata of muscular fibers surrounding the orifice of the mouth but having different direction.

Of the former, a considerable number are derived from the Buccinator and form the deeper stratum of the Orbicularis.

Some of the Buccinator fibers—namely, those near the middle of the muscle—decussate at the angle of the mouth, those arising from the maxilla passing to the lower lip, and those from the mandible to the upper lip.

The uppermost and lowermost fibers of the Buccinator pass across the lips from side to side without decussation.

Superficial to this stratum is a second, formed on either side by the Caninus and Triangularis, which cross each other at the angle of the mouth; those from the Caninus passing to the lower lip, and those from the Triangularis to the upper lip, along which they run, to be inserted into the skin near the median line.

The proper fibers of the lips are oblique, and pass from the under surface of the skin to the mucous membrane, through the thickness of the lip.

Finally there are fibers by which the muscle is connected with the maxillæ and the septum of the nose above and with the mandible below.

In the upper lip these consist of two bands, lateral and medial, on either side of the middle line; the lateral band (m. incisivus labii superioris) arises from the alveolar border of the maxilla, opposite the lateral incisor tooth, and arching lateralward is continuous with the other muscles at the angle of the mouth; the medial band (m. nasolabialis) connects the upper lip to the back of the septum of the nose.

The interval between the two medial bands corresponds with the depression, called the philtrum, seen on the lip beneath the septum of the nose.

The additional fibers for the lower lip constitute a slip (m. incisivus labii inferioris) on either side of the middle line; this arises from the mandible, lateral to the Mentalis, and intermingles with the other muscles at the angle of the mouth.

Newborn babies are occasionally born without one or both sides of this particular muscle resulting in a slight droop to the affected side of the face.

Muscles of head and neck. 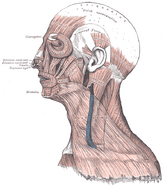 Muscles of the head, face, and neck.
Gray381.png
Scheme showing arrangement of fibers of Orbicularis oris.